'Mall': It's Not Just for Shopping

The word has its origin in a game

Whatever your relationship to your local shopping mall—whether you use it as a place to kill time while trashing your frenemies and scoping out cuties, or arrive before stores open to power walk its vast temperature-controlled halls, or make every effort to get in and out as quickly as possible when it's an unavoidable destination—the way you use the mall shows a complete and utter disregard for the history of the word mall. Which, of course, is fine. 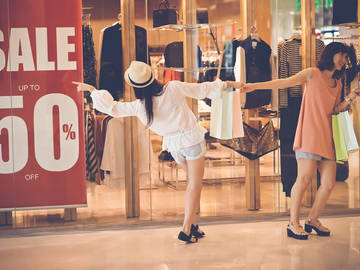 The word 'mall' comes from a 16th-century Italian alley game that resembled croquet. It was called pallamaglio, or pall-mall in English; the alley on which the game was played came to be known as a 'mall'.

If you want to get closer to the word's etymology, you'd do better to turn your focus to the National Mall in Washington D.C. Or maybe to cigarettes. Pall Malls, to be exact.

The Pall Mall cigarette brand was named for a tony London street, Pall Mall, that has for centuries been home to a number of social clubs in which suited gentlemen sip scotch and speak the Queen's English. That street got its name from a 16th-century Italian alley game resembling croquet. It was known as pallamaglio, from palla, "ball," and maglic, "mallet." The game was adopted by the French as pallemaille, and in the 17th century by the English as pall-mall. The alley on which the game was played came to be known as a mall. The street Pall Mall was originally one of these alleys.

Another pall-mall alley also became a famous London street. It's hard to believe it had such a frivolous beginning, but that elegant stretch between Buckingham Palace and Trafalgar Square is called "The Mall" (and formerly and more specifically "The Mall at St. James's") because it was originally a pall-mall alley. When people lost interest in the game, the alley was landscaped into a fashionable promenade lined with trees and flowers. Other similar, open-air places—like the U.S.'s National Mall—also came to be called malls. In the mid 20th century the word was applied to a variety of public spaces, ranging from an outdoor concourse between buildings to, you guessed it, that gargantuan complex off the highway where seas of cars wait in parking lots for their owners to emerge, bag-laden and weary, with shopping hauls and no thoughts of pall-mall at all.

That game, by the way, was described by Thomas Blount, in his 1656 Glossographia, as "a game wherein a round bowle is with a mallet struck through a high arch of iron (standing at either end of an alley) which he that can do at the fewest blows, or at the number agreed on, wins. This game was heretofore used in the long alley near St. James’s and vulgarly called Pell-Mell." The pronunciation that Blount describes as "vulgar" is still used for the game. The game, however, is unrelated to the adverb (also a noun and an adjective) pell-mell, which most often means "in a confused and hurried way" and comes from the French pelemele (that word being likely from Old French mesler, meaning "to mix, mingle"). Though we encourage anyone who wants to play pall-mall pell-mell, for the linguistic pleasure if nothing else.