Some people may have noticed that in recent years there has appeared a new kind of apology. This apology, it must be said, seems to bear only a passing resemblance to the mea culpa sort of apologies we all grew up with; it often is offered in the passive (“mistakes were made”), or the conditional (“If I have offended anyone I am sorry”), and rarely entails an outright admission of wrongdoing on the part of the apologizer. When did the word apology stop meaning “I’m sorry”?

Before it ever began. 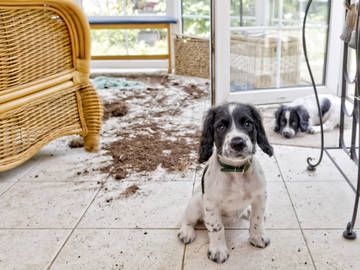 The first meaning of 'apology' was “something said or written in defense or justification of what appears to others to be wrong." These dogs aren't really sorry.

Apology comes to English from the Greek roots of apo- (“away from, off”) and logia (from logos, meaning “speech”). The word's earliest meaning in English was “something said or written in defense or justification of what appears to others to be wrong or of what may be liable to disapprobation.” To anyone who has ever studied ancient Greek or read widely of certain philosophers, this will come as no surprise. Plato’s Apology of Socrates is an account of the self-defense presented at the trial of Socrates, not an explanation of how that philosopher admitted his transgressions.

The earliest published use of apology we have evidence of comes from the title of a work by Sir Thomas More, the Catholic humanist and social philosopher of Henry VIII’s court. The word appears in his 1533 work Apologye of Syr Thomas More, Knyght. However, the first published use of a word is not necessarily the same thing as the first actual use of it, and there has recently been discovered earlier, hand-written evidence of apology in correspondence between members of the British court; a letter addressed to Cardinal Thomas Wolsey in 1526 contains the line “Here is an apologie made for the defence of the Frenche King."

If you encounter an apology anywhere in the 16th century chances are very good that the word is indicating a defense or justification, as in the case of the 1550 potboiler The Apology of Iohan Bale Agaynste a Ranke Papyst, or Robert Crowley’s summer beach read of 1566, An Apologie, or Defence, of those English Wryters & Preachers which Cerberus the Three Headed Dog of Hell, Chargeth wyth False Doctrine, Under the Name of Predestination.

So we may instead ask when did the apology start meaning “I’m sorry”?

That appears to have begun at the end of the 16th century, and we may blame Shakespeare for this (at least until we discover someone else who has used this word loosely before him). Most dictionaries today will not provide the earliest known date that a specific sense of a word appeared, but the Oxford English Dictionary does, and they currently have a line from Richard III: “My Lord, there needs no such apologie."

Shakespeare is renowned as a creator of new words, although he is often mistakenly given credit for coining elements of our vocabulary that already existed. Yet even though he did not invent most of the words which he is purported to have invented, he still was remarkably inventive with his language. He would play with the English language, stretching it and assigning new meanings to existing words with astonishing aplomb and daring.

It may well turn out that some writer before Shakespeare was using the word apology to indicate an admission of “I goofed and I am sorry for it,” but until we find such evidence we may still say that the Bard is the father of the modern apology—just not the “I’m sorry but not really sorry” kind.