On 'Caravan' and Words for People in Movement

The English language is rich in many ways (words for specific kinds of drunkards, words for being drunk, words for people you’d rather not sit next to at a dinner party), not least of which is that we have many ways of referring to groups of people moving together. One of these words is caravan. 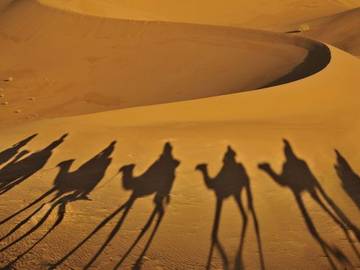 The use of 'caravan' as a verb began in the 19th century.

We define this word in two ways, as far as it relates to group travel: “a company of travelers on a journey through desert or hostile regions,” and “a group of vehicles traveling together (as in a file).” The first sense also may be applied to non-human travelers, such as a train of pack animals. Caravan came to English in the late 16th century, from the Italian caravana, which itself came from the Persian kārvān. Unsurprisingly, most of our earliest evidence in English occurs in translations.

Item the sayde merchauntes may in any place where they shall thynke best, buylde or bye any house or houses to theyr owne vses: And no person to molest or trouble them, and to stande in any Carauan where they wyll, or shal thinke good.
— Pietro Martire d’Anghiera, The History of Trauayle in the West and East Indies (trans. by Richarde Eden), 1577

But what are al these foxes, which are become wolues, in comparison of that treacherous carauane horde of those vermine, openly polluting the holy name of Jesus, and selling their fil|thy trash and trumperie in such sort Gratis….
— Théodore de Bèze, _ Master Bezaes Sermons upon the Three Chapters of the Canticle of Canticles_ (trans. by John Harmar), 1587

The Rubarbe commeth from thence ouer land, by the waye of Percia, because that euery yeare there goeth a great Carauan from Percia to China, which is in going thether six moneths.
— Cesare Federici, The Voyage and Trauaile of M. Caesar Frederick (trans. by T.H.), 1588

Caravan may also be used as a verb (“to travel in a caravan”), although this use came into English use a considerable length of time (almost three hundred years) after the noun was introduced.

In the meanwhile caravaning to all quarters is to be stopped.
— James Richardson, Travels in the Great Desert of Sahara, 1848

And this brings me to the monster cricket nuisance of the day—the so-called England Elevens, which go caravaning about the country playing against two bowlers and twenty duffers for the benefit of some enterprising publican.
— The Bradford Observer (Bradford, Eng.), 6 Aug. 1868

If we look to other words for describing groups in movement we see that English can offer great specificity and remarkable vagueness in this regard. Cavalcade may be defined as either “a procession of riders or carriages” or “a procession of vehicles or ships.” Motorcade may also refer to a procession of vehicles (motor vehicles), but is not used of carriages or riders. There are also words which share an etymological connection with cavalcade, but little of its meaning; an aquacade, for instance, is “a water spectacle that consists usually of exhibitions of swimming and diving with musical accompaniment,” and not a procession of ships.

Armada is the word to refer to a group of ships, although it initially was applied to a group of warships, and thus often has militaristic connotations (although the word may also be defined simply as “a large force or group usually of moving things”). Invasion may be used to refer to a movement of people, but, similarly to armada, often has connotations of violence, and so should be avoided unless you wish to indicate this.

Diaspora, which comes from the Greek word diaspeirein (meaning “to scatter, spread about”), is first found in the sense of “the Jews living outside Palestine or modern Israel,” a use that dates back to the late 16th century. In subsequent centuries the word has broadened somewhat, and taken on senses such as “the movement, migration, or scattering of a people away from an established or ancestral homeland.” When used in reference to Judaism the word is typically capitalized. There are words such as migration, which may be used to refer to the movement of people (“the individuals taking part in a migratory movement or those migrating during a given period”) or of animals (“periodic movement from one region or climate to another for feeding or breeding”).

People move about for many reasons, and if you are interested in writing with clarity and sensitivity it is important to choose words which accord with the circumstances of this movement.