The History of 'Aplomb'

If you're doing something with aplomb, do it with all the composure of a lead weight

If you do something with aplomb, you do it with composure and self-assurance. You do it with poise. You own it.

If you want to also do it in a way that pays homage to the word's origin, you can do it while holding a plumb line—that is, one of those cords with the lead weight dangling from it. 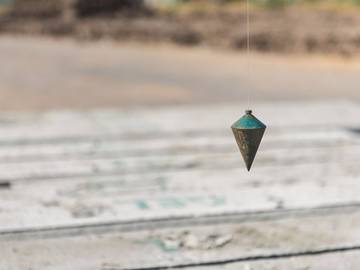 And who doesn't have one of those sitting around?

The word aplomb, you see, has its origins in a Middle French phrase a plomb, meaning "according to the plummet"—a plummet being the same thing as a plumb line. If you dangle a plummet or plumb line it will hang down perfectly vertically; it's a useful tool when you want to make things straight and square. Between the phrase a plomb and our word aplomb is the French word aplomb which shares the "composure" meaning of our modern word, but has another literal meaning that shows some appreciation for the plumb line itself: it also means "perpendicularity."

The word's life in English, which now spans two centuries, is not particularly colorful. We've mostly just used it to mean "complete and confident composure or self-assurance." It has a balletic application that seems completely appropriate too. Aplomb is something every dancer must try to master: the perfect equilibrium to maintain stability in a pose or movement.

Tracing back from the phrase a plomb, we wind up seeing cousins of aplomb that don't immediately necessarily bear a family resemblance. A plomb is the pairing of a, meaning "to, at, according to," and plomb, meaning "lead, plummet." Plomb has its roots in the Latin plumbum, meaning "lead," and plumbum is the source of such varied words as plummet, plumb, plumber (which originally referred to someone who deals or works in lead), and the symbol Pb, which designates the element lead on the periodic table. It's also the source of the word plunge, and therefore plunger. The fact that a plumber is able to use a plunger with more aplomb than most of us is, however, merely coincidence.