The word has a bloody past

Shambles is both an old word and a new one. It's old in that most of its senses had developed by the end of the 16th century; it's new in that the senses in which it's now commonly (and almost exclusively) used date only from the 1920s. 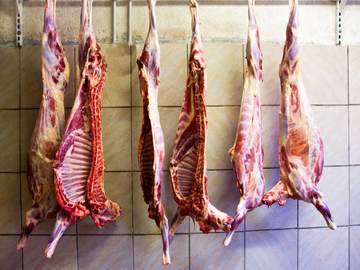 Though 'shambles' commonly means "a scene or state of great disorder and confusion," it historically referred to a slaughterhouse.

The word (in a singular form) originally meant "a stool" and "a money changer's table." Later it acquired the additional meaning of "a table for the exhibition of meat for sale," which in turn gave rise in the early 15th century to a use of the plural form with the meaning "a meat market." A further extension of meaning in the 16th century produced the sense "a slaughterhouse." That meaning quickly led to the figurative use of shambles to refer to a place of terrible slaughter or bloodshed.

A few centuries passed with the word being mostly used with the literal "slaughterhouse" and figurative "place of mass slaughter or bloodshed" meanings you'll find in the traditional literature of the western canon. For example, in Shakespeare's Othello, poor Desdemona says to her husband, "I hope my noble lord esteems me honest." Othello's harsh reply is "O, ay, as summer flies are in the shambles, That quicken even with blowing." And Mr. Rochester says to the hero in Charlotte Brontë's Jane Eyre: "If the man who had but one little ewe lamb that was dear to him as a daughter, that ate of his bread and drank of his cup, and lay in his bosom, had by some mistake slaughtered it at the shambles, he would not have rued his bloody blunder more than I now rue mine. Will you ever forgive me?" In Jack London's The Road, an effort to extirpate bed bugs from a prison cell is described thusly: "Never was there such a battle. It lasted for hours. It was shambles."

The company set up shop in Albania and elsewhere in Eastern Europe after the collapse of communism when local economies were in shambles.
—Ana Campoy, Quartz (qz.com), 24 May 2016

More than eight years after the storm left the area in shambles the population is edging toward pre-hurricane levels of 400,000, fueling the housing boom.
—Alina Dizik, The Wall Street Journal, 28 Feb. 2014

This is comedy about trying to do comedy, dealing with "the business," and haplessly tending to the personal life falling into shambles around it.
—Winston Cook-Wilson, Inverse.com, 2 Dec. 2015

The grammarians of the 20th century may have thought that shambles itself was in a shambles, but we suspect that most English speakers who use the word today think it's doing just fine.