noun, plural in form but singular or plural in construction
Save Word
sham·​bles | \ ˈsham-bəlz

1 archaic : a meat market
2 : slaughterhouse
3a : a place of mass slaughter or bloodshed the battlefield became a shambles
b : a scene or a state of great destruction : wreckage the city was a shambles after the bombing
c(1) : a scene or a state of great disorder or confusion an economy in shambles
(2) : great confusion : mess
Did you know? More Example Sentences Learn More About shambles

How does a word meaning "footstool" turn into a word meaning "mess"? Start with the Latin scamillum, meaning "little bench." Modify the spelling and you get the Old English sceamol, meaning "footstool" or "a table used for counting money or exhibiting goods." Alter again to the Middle English shameles, and the meaning can easily become more specific: "a table for the exhibition of meat for sale." Pluralize and you have the base of the 15th-century term shambles, meaning "meat market." A century takes shambles from "meat market" to "slaughterhouse," then to figurative use referring to a place of terrible slaughter or bloodshed (say, a battlefield). The scene of a slaughter can get messy, so it's logical for the word to pick up the modern sense "mess" or "state of great confusion." Transition accomplished.

Examples of shambles in a Sentence

Recent Examples on the Web Unfortunately, the world remains in shambles, especially with what’s going on in Ukraine. — Billboard Staff, Billboard, 19 Apr. 2022 The standoff over congressional and legislative maps has made a shambles of a redistricting process aimed at removing politics from mapmaking that Ohio voters resoundingly approved via constitutional amendments in 2015 and 2018. — New York Times, 29 Mar. 2022 The Reds finished their first 100 games with just 30 losses, making a shambles of the National League West Division race by opening up a 12½-game lead over second-place Los Angeles. — Mark Schmetzer, The Enquirer, 11 Nov. 2020 What’s left of the man when the work’s done but a shambles of apology. — Christopher Beha, Harper's Magazine, 27 Oct. 2020 When the Taliban captured Kabul last August and hundreds of thousands of Afghans headed for the exits, their pathway to the U.S. was in shambles. — Eliza Griswold, The New Yorker, 25 Apr. 2022 After an abrupt goodbye left fans in shambles, questions about the actor and his character haven’t ceased. — Selena Barrientos, Good Housekeeping, 12 Apr. 2022 His economic policies left the country in a shambles, yet his advisers remained the chief source of the opposition’s economics program. — John Fund, National Review, 5 Apr. 2022 Woods and his son, Charlie, almost won the PNC Championship less than a year removed from his single-car crash that left his lower body in shambles. — USA TODAY, 25 Mar. 2022 See More

These example sentences are selected automatically from various online news sources to reflect current usage of the word 'shambles.' Views expressed in the examples do not represent the opinion of Merriam-Webster or its editors. Send us feedback.

First Known Use of shambles

History and Etymology for shambles

The first known use of shambles was in the 15th century

Listen to Our Podcast About shambles 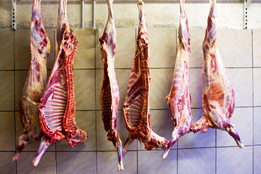 The word has a bloody past

: a place or scene of disorder or destruction After the party, the house was a shambles.
Hint: Shambles can be used as a singular or a plural in writing and speaking.

More from Merriam-Webster on shambles

Thesaurus: All synonyms and antonyms for shambles