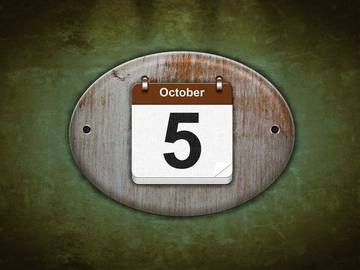 Let this serve as a reminder to start planning your Halloween costume now.

Once again the week’s top lookups were largely driven by coverage of Brett Kavanaugh’s nomination to the Supreme Court. None of these were particularly happy words. Partisan, prevaricate, whitewash, witch hunt, exculpatory ... well, exculpatory could be a happy word to the person who is being exculpated. But otherwise these are not words for having a great time.

Partisan may be used with a small number of meanings, and as both adjective and noun. The adjective sense most often intended in political discussions of late is “feeling, showing, or deriving from strong and sometimes blind adherence to a particular party, faction, cause, or person.” While the noun sense (“a firm adherent to a party, faction, cause, or person”) dates back to the middle of the 16th century, this adjective did not arise until the early 19th. After people began to use partisan as an adjective in this manner it did not take long for the word to be paired with politics.

There is nothing more elastic than the creed of a thorough-going party-man. We have before us an amusing illustration of this quality of purely partizan politics, that is too good to be followed by any thing else, and we shall therefore conclude with it.
— Weekly Raleigh Register (Raleigh, NC), 10 Apr. 1827

Members of all political parties found themselves arguing that their opponents had been less than honest, and thus, unsurprisingly, prevaricate was looked up a good deal. A fancy way of saying “that’s not quite the truth you’re speaking,” prevaricate is one of a great number of synonyms our language has for lie. If you have sufficient liars in your life that you need additional synonyms we have a number of them collected here.

Exculpatory remained among our top lookups this week, after having drawn considerable interest when it came up in Dr. Christine Blasey Ford’s testimony before the Senate Judiciary Committee the previous week. The word means “tending or serving to exculpate,” and the final word of that definition means “to clear from alleged fault or guilt.” Should you be in need of a noun, the word exculpation is defined as “the act or fact of exculpating from alleged fault or crime.”

The Latin word culpa, meaning “blame,” serves as the root of exculpatory, and for a number of other blameworthy English words, including culpable ("meriting condemnation or blame”), inculpate (“to incriminate"), and the considerably rarer culpatory (“accusing").

Whitewash also found itself much in the news recently, after a number of Democratic members of Congress found that the investigation made by the FBI into allegations that Kavanaugh had sexually assaulted a number of women was less thorough than they had anticipated it being.

The report, sent by the White House to the Senate Judiciary Committee in the middle of the night, was denounced by Democrats as a whitewash that was too narrow in scope and ignored critical witnesses.
— David Morgan & Amanda Becker, Reuters (reuters.com), 4 Oct. 2018

Whitewash has been used in reference to painting something with a coat of white paint for hundreds of years, perhaps most memorably in Mark Twain’s Tom Sawyer, in which the titular hero finds a way of making the onerous task of painting a fence seem attractive enough to other children that they pay for the privilege of assisting Tom.

’Oh, come now, you don’t mean to let on that you like it?’
The brush continued to move.
’Like it? Well, I don’t see why I ought’nt to like it. Does a boy get a chance to whitewash a fence every day?’
That put the thing in a new light.
— Mark Twain, The Adventures of Tom Sawyer, 1876

The sense in which the word has been used this past week has little, if anything to do with paint, or fences. The relevant sense is defined as “to exonerate by means of a perfunctory investigation or through biased presentation of data.”

Some of those who did not find the FBI’s report to be a whitewash felt instead that the entire investigation was a witch hunt. The figurative use of this term (in cases where no actual witches are hunted) has spiked in lookups several times in recent years, as it is often employed by President Trump. This sense has been in figurative use since the 1920s, and we define it as "the searching out and deliberate harassment of those (such as political opponents) with unpopular views."

Finally, for our antedating of the week we turn to the word senatorial (“of, relating to, or befitting a senator or a senate"), as the deliberations of the United States Senate have been so closely watched this past week. Our previous earliest known use of the word had been from 1740; recent findings have shown it in use in the 16th century.

Now as touching that other point mentioned by that wise man Cleobulus, namely, that a man must not dally with his wife in the presence of others, Cato depriued a Senator of Rome from the Senatoriall dignitie, bicause he kissed his wife in his daughters presence.
— Pierre de la Primaudaye, The French Academie (trans. by T.B.), 1586