For many people—especially New Englanders (wicked or not) and fans of Daniel Day-Lewis or Winona Ryder (stars of the 1996 movie version of Arthur Miller's The Crucible)—17th-century Salem, Massachusetts, comes to mind when they hear the word witch hunt. The persecution of witches goes back to ancient times, but it was during the 16th and 17th centuries that witch hunts intensified. Each began with a single suspicion or rumor that was given impetus by paranoia and mob-mentality. 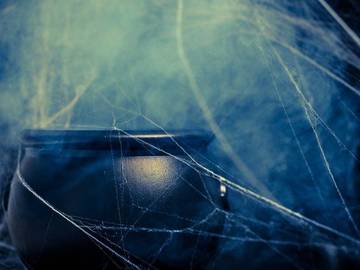 That's what happened in the Massachusetts Bay Colony of Salem, where several young girls, spurred by supernatural tales told to them by a servant, claimed to be possessed by the devil and accused three village women of witchcraft in 1692. Under pressure, the accused women named others in false confessions, resulting in the execution of 14 women and 6 men for the crime of witchcraft. Miller encapsulates the dark events in his theatrical parable, staged in 1953, which also echoes the reality of the time: the 1950s investigations and hearings conducted by Wisconsin Senator Joseph McCarthy to identify and persecute alleged Communists (including Miller) who infiltrated various areas of the United States government.

The term witch-hunting first bewitches the English language in the 17th century, but related terms, such as the nouns witch hunt and witch-hunter, are first documented significantly later—in the 19th century; the verb witch-hunt is conjured in the 20th century. Witch hunts, historically, begin with blame: someone accuses a neighbor as being a witch and states that they know so because the woman or man preternaturally prevented butter from churning, caused injury, killed off livestock, destroyed crops, or created family dysfunction. Neighbors find that, come to think of it, they are similarly cursed and start pointing fingers—which begins the hunt for someone in a covenant with Satan.

In Cold-War America, the metaphorical witch hunt is cast. Prescient Big-Brother author George Orwell provides us with early print evidence of this use in his 1938 book Homage to Catalonia in which he relates how, in the Spanish Civil War, political persecutions were a common occurrence.

The Communist tactic of dealing with political opponents by trumped-up charges is nothing new. … Rank-and-file Communists everywhere are led away on a senseless witch-hunt….

As in the supernatural cases of witch hunts, the metaphorical witch hunt consists of a single-minded, bullying campaign in which a person or group is identified as possessing an unacceptable or subversive viewpoint—especially in regard to politics—and is, hence, persecuted.

Because of the popular hatred of fascism in democratic countries, the method of eliminating all opposition to Russia consists in launching a fascist witch-hunt against all those who dare to question Russian policies.
— Alexander Baird, The Commonweal, 14 Sept. 1945

A "witch hunt" can perhaps be best defined as a political campaign designed to blacken the moral character of all supporters of an opposing party, rather than simply to cast aspersions on the intelligence or the honesty of its candidates. The Un-American Committee evidently assumes that any young idealist who "gets infiltrated" is a traitor to be punished by public branding, and by blacklisting from all employment, public or private.
— David Cushman Coyle, The Yale Review, Spring 1948

Here are stories of what happens when Congressional and state committees, loyalty boards, universities, corporate groups, Chambers of Commerce and newspapers stir up a witch-hunt and try to classify American citizens on the basis of their thoughts, associations, political view and such like.
— Arthur G. Hays, The New Republic, 19 Sept. 1949

Most notably, the term witch hunt is connected with Senator Joseph McCarthy's questionable questioning of government officials, and other people of note, about suspected Communist activities—all under the aegis of the House Un-American Activities Committee, or HUAC—leading to the formation of the word McCarthyism, which is used in reference to the defamation of one's character or reputation by indiscriminate or unsubstantiated allegations. In 1954, McCarthy's witch hunt was doused by broadcast journalist Edward R. Murrow, who in televised series of hearings revealed McCarthy's irresponsible tactics, wild accusations, and disregard for civil liberties and civil discourse. Consequently, McCarthy was censured by the Senate for his conduct that year.

More recently, the term witch hunt has frequently been cited by President Donald Trump to describe the congressional investigation into his election campaign.

This is the single greatest witch hunt of a politician in American history!

He's not alone among modern presidents making use of it:

President Nixon and his top aides believe that the Senate Watergate hearings are unfair and constitute a “political witch-hunt,” according to White House sources. The sources said that the President in recent weeks had expressed bitterness and deep hostility toward the two-month-old proceedings.
— Bob Woodward and Carl Bernstein, The Los Angeles Times, 22 July 1973

It's not uncommon for a rift to develop between politicians (or a politician and the media), especially when it arises from questioning of personal misconduct. But declaring a "witch hunt" has, historically, not brought justice.

Of course, if the quest of the hunt is simply to find an actual witch, a simple urine sample might do the trick. (Hold on. It's about to get weird.) In the past, urine from the accused was added to a "witch cake," which was then fed to a dog. (Told you.)

Only after a dish of "witch cake" (a blend of rye meal and the sufferers' urine baked in ashes) was fed to dog, where their tongues loosened.
— Time, 12 Sept. 1949

If the dog suffered symptoms of illness, the person was said to be a witch. There's also a "witch-mark," an oddly-shaped mole or wart, to look for—but baking is more fun. (For you, at least. Not sure about the dog.)