The words that defined the week of September 21st, 2018 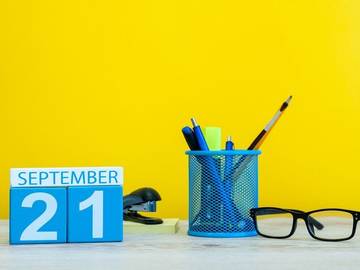 Do you remember (the words that trended the week of) the 21st night of September?

Allegation was much in the news in the past week, with considerable interest in the nomination of Brett Kavanaugh to the Supreme Court, and the attempted rape accusations leveled against him by Christine Blasey Ford.

Grassley was forced to postpone a planned committee vote on Kavanaugh's nomination scheduled for Sept. 20 after Democrats and some of his GOP colleagues demanded the committee investigate the allegations.
— Deidre Walsh & Kelsey Snell, NPR (npr.org), 20 Sept. 2018

Allegation (and allege) comes from the Middle English alleggen, meaning “to submit in evidence or as justification.” The Middle English word itself may be traced back to the Latin allegare, which means "to send as a representative" or "to offer as proof in support of a plea." The word has been in use in English since the 14th century.

Speaking of the 14th century, this is when the English-speaking people began to use the word likely in an adverbial fashion. Recently John Cleese took to Twitter and excited a large number of people who love to hate certain forms of English usage (meaning ‘those forms that are used by other people’) by denouncing the filthy American habit of using likely as an adverb.

Or using" likely " as an adverb, just because it looks like one

Cleese joins a distinguished collection of British writers who blame Americans for language changes that began in the United Kingdom. The historically minded among you may have caught the line earlier about how likely has functioned as an adverb in English since the 14th century; this comes somewhat before America was established. It is possible that Cleese, well-known as a comedian, was simply making a joke in which semantic drift, revisionist attitudes to colonial history, and an epistemological fallacy walk (funnily) into a bar, and it's that type of British humor that doesn’t quite translate. (If you are interested in getting all hot and itchy with people on Twitter about could care less, we wrote about this here.)

Returning to the words which were influenced by the Kavanaugh coverage this past week, horseplay spiked in lookups after the word was used in a manner that some thought infelicitous (and others thought wrong).

“I thought he might inadvertently kill me,” Ford told the Washington Post of the Supreme Court nominee. She said the experience led her to struggle with academic and social problems, as well as symptoms of anxiety and PTSD that lasted years. But according to one of Kavanaugh’s supporters, the behavior Ford describes might’ve been just “horseplay.”
Carrie Severino, a lawyer for the Judicial Crisis Network, a group backing Kavanaugh, said on CNN on Tuesday that Ford’s allegations could describe “a whole range of conduct, from boorishness to rough horseplay to actual attempted rape.”
— Anna North, Vox (vox.com), 19 Sept. 2018

We define horseplay as “rough or boisterous play.” Although this is the oldest meaning, it is not the only one in which the word has been used over the past four centuries. The Oxford English Dictionary also provides a definition for a more literal interpretation of the word, now quite obsolete: “Play in which a horse is used or takes part; theatrical horsemanship.” There do not appear to be any dictionaries which have defined this word with a sexualized meaning.

Eleventh hour was also used quite a bit more this past week than it usually is, as media figures and politicians who supported the Kavanaugh’s nomination used the idiom to question why his accuser was bringing charges now. Eleventh hour is defined as “the latest possible time before it is too late,” and has been used since the 18th century as a noun and in an attributive role, functioning as an adjective (“an eleventh hour development”). It so called from the parable of the vineyard (Matthew 20:1–16) where laborers hired at the “eleventh hour” are paid the same wage as those hired early in the day. Although it often is used today in the sense of ‘late-breaking development or game changer,’ in early use the biblical connection is more clear.

Those pretended Friends of Liberty have in one Moment rendered more Heart-felt Satisfaction to the best of Princes than Mr. Harley and all his associated ever did through the whole Course of five Years Labour. They indeed came in at the Eleventh Hour, but may with solid Reason expect as much as him who bore the Heat of the Day.
— The Public Advertiser (London, Eng.), 25 Nov. 1772

The humble word cereal received considerably more attention last week than it usually does, after Kylie Jenner made the claim on Twitter that she had, for the first time ever, just partaken of cereal with milk.

last night i had cereal with milk for the first time. life changing.

Many of the comments in response to Jenner’s tweet varied between bewilderment and scorn. While we have no feelings one way or another as to the propriety of the tweet, we can point out that cereal is perhaps slightly newer than many people think. The word, which is thought to have possibly come from the name of the Roman goddess Ceres, began being used in English in the early 19th century.

At this point cereal did not refer to a thing that you poured out of a box and doused with milk; the definition for the word’s initial use as a noun was “a plant (such as a grass) yielding starchy grain suitable for food” (the adjective sense, meaning “relating to grain or to the plants that produce it” came slightly before the noun). It was not until the latter portion of the 19th century that we began using cereal to refer to something that was peculiar to the breakfast table. For the first several decades that people were shoveling milk-soaked spoonfuls of this stuff into their maws it was more commonly called cereals, rather than cereal.

For our antedating of the week we go back to horseplay. Our earliest record of use had previously been from 1589; it has recently been pushed back to 1561. And no, this new earliest use still has nothing to with horses playing (or with sexual assault).

This is the name alone whiche they deeme woorthie praise, and whiche they bragg more of, then of anye thing elles, and to gete it them, thei speak the foulest and shamefullest villanies in the world. Many times they shoulder one an other downe the stayers, and hurle billettes and brickes, one at an others head. They hurle handfulles of dust in mens eyes. Thei cast horse and man into ditches, or downe on the side of some hill. Then at table, potage, sauce, gelies, and what euer commeth to hande, into the face it goith. And afterwarde laughe: and whoso can doe most of these trickes, he counteth himselfe the best and galantest Courtyer, and supposeth that he hath wonne great glorye. And in case otherwhile they gete a gentleman in these their pleasaunt pastimes, that will not geue himselfe to suche horseplay, they say by and by: He is to wise, we shall haue him a Counseller, he is no good felowe.
— Baldassarre Castiglione (trans. by Thomas Hoby), The Courtyer of Count Baldessar Castilio Diuided into Foure Booke, 1561