In an attempt to add another dubious assertion to our collection of rhetorical proclamations, we may state with absolute assurance that there are but two kinds of people in this world: those who feel very angry when someone omits a negative particle in “I couldn’t care less,” and those who don’t give such matters much thought. Is there a meaningful difference between these kinds of people, or these two phrases? 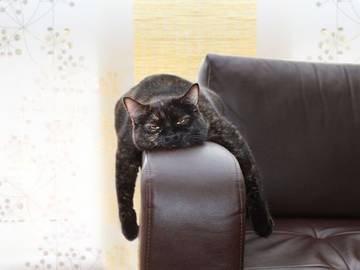 We care just enough to take a look.

We define could care less and couldn’t care less on the same page, with the single definition “used to indicate that one is not at all concerned about or interested in something.” We do not put these seemingly disparate idioms on the same page in order to save space, or so that we might cause you pain. We do it because one is simply a variant of the other, and they are used in a synonymous manner.

There is little doubt that couldn’t care less is the older form, although no one is certain where this came from. There has been speculation that it is British in origin, and that American soldiers returning from World War II brought it to these shores. While it may indeed have come from the United Kingdom, there is clear evidence that couldn’t care less was in use prior to the 1940s.

Exasperated, she jumped up. ”I couldn’t care less,” she said, “whether you come or go.”
— Hearst’s International - Cosmopolitan, May 1929

Could care less does not appear to have become a fixed variant until some time after this.

He hasn’t heard from the department since. Apparently, they could care less.
— The Chilliwack Progress (Chilliwack, Can.), 6 Jan. 1954

There have been numerous theories about why people began to drop the negative particle, including sarcasm, lack of education, and that the phrase simply sounds better when omitting the not. We have no firm opinion on any of these, but would like to point out that uses of could care less with the negation given elsewhere in the sentence have been around for a fairly long time.

The writer evidently has no more heart for the appreciation of Canning and his errors than Lord Palmerston himself has, and evidently cares no more about Lord Palmerston, whom he tries to praise, than we ourselves do. It is impossible that he could care less.
— The Morning Post (London, Eng.), 18 Jul. 1840

His bearing towards male acquaintances, of whom he knew little or nothing and could care less, was marked by an affectation of gushing friendliness, which overdid itself.
— The Dundee Courier (Dundee, Sc.) 12 Jul. 1865

Additionally, the uncontracted form of couldn’t care less appears to have been in use since the 19th century.

I know many people who, if the archbishop were to be roasted, would go to get a bit of him, because he has yielded to the Catholics respecting giving children the whole Bible. But he goes on, and he could not care less for abuse if he were made of wood.
— Lucy Aikin, Memoirs, 1864

We understand why could care less sticks in your craw: it appears to mean something rather opposed to what it purports to mean. The person who says “I could care less” is, on the face of it, stating “Yes, it would be possible for me to care less deeply about this matter than I do, and therefore I am betraying some unspecified degree of care.” But if you are the kind of person who cries out against this abomination we must warn you that people who go through life expecting informal variant idioms in English to behave logically are setting themselves up for a lifetime of hurt.

Both could and couldn’t care less are informal, and so you are unlikely to use either one in formal writing. If you have need of using it in some other context, and would like to avoid alienating some portion of your audience you should stick with couldn’t care less. And if you can’t get past some people continuing to use could care less, and the fact that there’s nothing you can do about it, you may console yourself with the notion that at least they are not saying “I could care fewer.”

MORE TO EXPLORE: Is 'Could Of' an Accepted Form of 'Could Have'?