The words that defined the week of September 7th, 2018 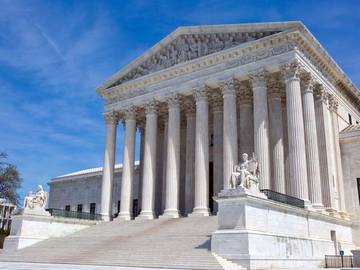 'Loadstar' is a less common spelling of 'lodestar.'

Many of the lookup spikes this week were driven by interest in the Senate hearings for Brett Kavanaugh, who has been nominated to join the Supreme Court. We applaud the interest in civics and jurisprudence, and want our readers to know that such legal discussions are not always concerned with obscure Latin phrases and archaic English idioms; sometimes they are centered on silly abbreviations from old code-books, like SCOTUS.

One of those obscure Latin phrases that came up during the Kavanaugh hearings was stare decisis.

The Court has been reluctant to overrule its own precedent over the years under the legal principle of stare decisis: "Stare decisis is usually the wise policy, because in most matters it is more important that the applicable rule of law be settled than that it be settled right," wrote former Supreme Court justice Louis Brandeis, in a ruling cited often when overruling precedent is considered.
— Ryan Struyk, CNN (cnn.com), 5 Sept. 2018

The term (which rhymes with ‘Mary! A crisis’), is defined as “a doctrine or policy of following rules or principles laid down in previous judicial decisions unless they contravene the ordinary principles of justice.” In Latin the meaning is “to stand by decided matters.”

Coin of the realm also received considerable interest from our readers, after Kavanaugh used the phrase in testimony.

Kavanaugh said he did not know that any of the information Miranda exchanged with him was taken inappropriately. He added that it was common to prepare nominees with material they believed would be asked.
"I just want to be clear here, because it is very common when in judicial selection process to determine what are all the senators interested in for an upcoming nominee or upcoming hearing," Kavanaugh said. "That is the coin of the realm. “
— Rebecca Morin, Politico (politico.com), 5 Sept. 2018

We give two senses for coin of the realm; a literal one (“the legal money of a country”), and a decidedly figurative one “something valued or used as if it were money in a particular sphere”). The figurative sense, used by Kavanaugh, is now the more common use. The literal meaning has been in use since the early 17th century, at least.

In counterfeiting coyne that is not the coyne of the Realme, or currant in the Realme, the Queenes signe, manuell priuie signet, or priuie seale: and all procuring and abetting.
— Henry Finch, Law, or, a Discourse Thereof in Foure Bookes, 1627

Amicus also spiked in lookups during the hearings, after Senator Mazie Hirono of Hawaii took exception to a number of points made by Kavanaugh in an amicus brief he’d filed in 1999.

In 1999, Judge Kavanaugh wrote an op-ed and amicus brief that disparaged the Native Hawaiian community. He wrongly asserts that Native Hawaiians are not an indigenous community. I won't let that stand. #StopKavanaugh pic.twitter.com/6sc0vNRyNu

Amicus is often short for amicus curiae, defined as “one (such as a professional person or organization) that is not a party to a particular litigation but that is permitted by the court to advise it in respect to some matter of law that directly affects the case in question.” The term comes from Latin and means “friend of the court” in that language. Some courts are more popular than others, and may have many friends. In such cases the terms are pluralized as amici and amici curiae.

In addition to the Senate hearings, an anonymous op-ed in The New York Times drew considerable interest. The piece, said to have been written by a senior official in the Trump administration, caused lookups to spike for words such as lodestar (and its less common variant loadstar).

We may no longer have Senator McCain. But we will always have his example — a lodestar for restoring honor to public life and our national dialogue. Mr. Trump may fear such honorable men, but we should revere them.
— Anon., The New York Times, 6 Sept. 2018

Lodestar has an original, and now archaic, meaning of “a star that leads or guides (especially the North Star).” The current sense is “one that serves as an inspiration, model, or guide.” While this figurative meaning is certainly more commonly used today than the word’s older meaning, it is by no means common, leading some armchair philologists to speculate on the identity of the writer based on an analysis of who else uses the word lodestar. Forensic linguistics is a real thing, and its practitioners tend to rely on a methodology that is somewhat more precise than ‘find the funny word and see if it matches.’

Anonymuncule was not trending this past week as the result of the anonymously written article, but we think it should have been, as it is perhaps the only word in English for “anonymous writer.” (Yes, we know that there is also anonym, but that just refers to an anonymous person, not specifically a writer). To be honest, the full definition of anonymuncule is a bit harsher, as it adds “insignificant” to “anonymous writer.” Our earliest evidence for this word comes from Charles Reade, who employed it in a note in his 1859 work, Love Me Little, Love Me Long:

There is a little unlicked anonymuncule going scribbling about, whose creed seems to be that a little camel, to be known, must be examined and compared with other quadrupeds, but that the great arts can be judged out of the depths of a penny-a-liner’s inner consciousness, and to be rated and ranked need not be compared inter se.
— Charles Reade, Love Me Little, Love Me Long, 1859

For our antedating of the week we turn to the words solipsism and solipsistic. We define solipsism as “a theory holding that the self can know nothing but its own modifications and that the self is the only existent thing” or “extreme egocentrism,” and give solipsistic as the adjective form of the word. These words have been chosen because we feel like behaving kinda solipsistically, and writing about the antedating of solipsism and solipsistic seems like a good way of doing that. And also because Tim O’Brien used the adjective on television a few days ago, which made lots of people look these words up.

Until recently our earliest known record was 1885 for solipsistically, and 1874 for solipsism. However, we have now found evidence of the former from 1882, and the first known use of the latter has been pushed all the way back to 1799. Champagne has been ordered.

Nothing but pure and unadulterated idealism, carried out to its extreme solipsistic conclusion, consists with the subjectivism which he here maintains.
— F. E. Abbot, The Index, 20 Jul. 1882

But ethics take an opposite way. They cannot set out from the ends, which a person may posite to himself and accordingly dispose of his maxim that may be adopted, id est, his duty; for that would be empirical grounds of the maxims, which yield no conception of duty; as it (the categorical shall) has its roots in pure reason only; as also, if the maxims should be adopted according to those ends (which are all dictated by solipsism), the conception of duty could properly speaking have no connexion whatever with the subject in hand.
— Emanuel Kant (trans.), The Metaphysic of Morals, 1799