What do SCOTUS, POTUS, and FLOTUS mean?

The acronyms began as telegraph codes

-OTUS, the shortened version of the phrase "of the United States," was an unlikely addition to our language, as it is both a suffix and an acronym (or, if you prefer, an initialism). Yet this collection of letters has managed to be quite successful. We began using -OTUS in the late 19th century, and we're still finding new ways to use it today. 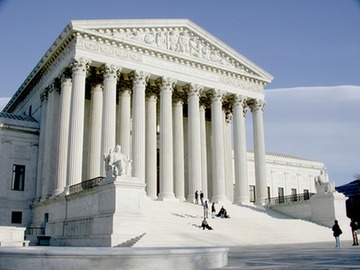 'POTUS' began as an abbreviation used by telegraphic code operators in the 1890s. It stands for "President of the United States."

The earliest recorded use any variant of -OTUS is from 1879, when SCOTUS (Supreme Court of the United States) appeared in a book titled The Phillips Telegraphic Code for the Rapid Transmission by Telegraph. This work, by Walter P. Phillips, was one of a large number of code books which allowed people to send inexpensive or secret messages via telegraph. Telegraphs were priced based on length, so one wanted to use as few words as possible. SCOTUS appeared between the abbreviations for scoundrel (scndrl) and scribble (scribl).

The next -OTUS word to enter our vocabulary was POTUS, short for "President of the United States," which was used as early as 1895. POTUS also began as an abbreviation used by telegraphic code operators. It wasn't the first shortening used by the telegraphic community for this title: Frank Miller’s 1882 Telegraphic Code to Insure Privacy and Security in the Transmission of Telegrams offered the curious suggestion of telegraphing the word mortmain, rather than "President of the U.S." As one of the meanings of mortmain is "the influence of the past regarded as controlling or restricting the present," it seems possible that the code book's compiler had a sense of the poetic.

Although SCOTUS and POTUS are by far the most common words to use this suffix, they are far from the only ones. FLOTUS ("First Lady of the United States") appeared in the 1980s, where it may have originated as the Secret Service's code name for Nancy Reagan. The Vice President is occasionally referred to as VPOTUS, although the difficulty in pronouncing the initial vp of that word perhaps contributes to its relative scarcity.

Occasional nonce-usages of -OTUS will come up, such as COTUS (constitution) and TOTUS (teleprompter, in a dig at President Obama's ostensible use of them). Time will tell if additional -OTUS words continue to join our language.