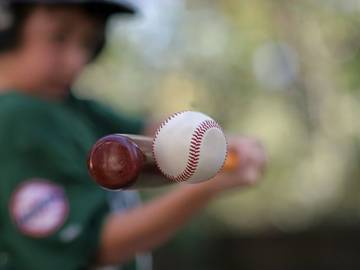 We've got some real humdingers in there this week.

The word has come about in several slang and colloquial contexts over the past few centuries. It may occasionally be found used in reference to baseballs hit with considerable force, but which are not home runs (in such cases dinger is possibly functioning as a shortening of humdinger).

Hartley hit a dinger down to E. Justice, and E. Justice obliterated the venerable Joshua at the pan.
— Omaha World-Herald (Omaha, NE), 20 Apr. 1913

There was a great shout when Neal, the first to bat, hit a dinger to center field for one bag.
— Daily Illinois State Register (Springfield, IL), 21 Jun. 1904

By the early 1970s dinger was seeing use specifically referring to a home run.

Whereupon Super Sub John Kennedy walked by, and in mock seriousness demanded: "Are you still talking about that bunt you beat out, Reggie? I hit a dinger, and nobody interviews me."
— The Boston Herald, 4 Apr. 1973

The news that Aretha Franklin, the Queen of Soul, had passed away sent many people to looking up the definition of respect. This word, which served as the title of what was perhaps Franklin's best known song, has been in English use since the 14th century, and comes from the Latin respectus (which literally means "act of looking back"). This increase in lookups should not necessarily be taken as evidence that people are unaware of some meaning of respect; words are often looked up for reasons independent of meaning. People may be in search of an etymology, a quote, pronunciation, or simply a desire to draw an association between vocabulary and memory. While we provide numerous definitions for senses of respect (as a verb and a noun) we also recognize that there are certain phenomena of beauty, such as Sarah Vaughan's vibrato and Aretha Franklin's voice, which must in some way remain indefinable.

On Thursday evening several publications reported that jurors in the case against Paul Manafort, Donald Trump's former campaign manager, had asked for a definition of reasonable doubt.

We define reasonable doubt as "a doubt especially about the guilt of a criminal defendant that arises or remains upon fair and thorough consideration of the evidence or lack thereof." A note at this entry in our dictionary states further "Proof of guilt beyond a reasonable doubt is required for conviction of a criminal defendant. A reasonable doubt exists when a factfinder cannot say with moral certainty that a person is guilty or a particular fact exists. It must be more than an imaginary doubt, and it is often defined judicially as such doubt as would cause a reasonable person to hesitate before acting in a matter of importance."

The shifting nature of what it means to tape someone arose last week as well, when a number of web sites and newspapers reported on the habit of former White House staffer Omarosa Manigault Newman of recording her conversations.

Omarosa Manigault Newman secretly taped John F. Kelly, the White House chief of staff, as he fired her in December in the Situation Room, a breach of security protocols, but one that revealed him suggesting that she could face damage to her reputation if she did not leave quietly.
— Maggie Haberman, The New York Times, 12 Aug. 2018

Tape is a word of considerable semantic breadth, as both a verb and a noun. The sense which is relevant to these stories is the one which we define as "to record on tape and especially magnetic tape." This sense dates back to the 1940s, originally in reference to recording television shows and music, rather than political opponents.

Crosby to Be Taped From Now on as Tests Show Improvements. Bing Crosby's on tape, from now on. His season's teeoff stanza on ABC tonight (Wed.) was tape-recorded, then tape-edited, then transferred to platters. Until a better process comes along, all future shows will be similarly waxed.
— Variety, 1 Oct. 1947

Tape is hardly unique in this regard; the word wiretap is still very much in use, referring to a means of getting information from someone's telephone, even if actual wires are not often part of the protocol. Wiretap also serves as this week's antedating; the noun form of this word had previously been known to us only as far back as 1907, but recent findings have shown it in use since the late 19th century.

The over-the-river pool-room proprietors were congratulating themselves last evening that they had escaped what they firmly believe to have been a "wire-tap" on the fifth race at Guttenberg yesterday.
— The Cincinnati Enquirer, 2 Apr. 1892

A Wire-Tap That Was Discovered.
There was excitement around the House of David Poolroom to-day when the racing wires were tapped, and the New Orleans book narrowly escaped a loss of thousands of dollars.
— The Cincinnati Enquirer, 30 Mar. 1895