The words officious and official are often confused, which is reasonable enough, since we frequently have this habit with words that share a beginning. But they needn’t bedevil, and by looking at the history of each word it becomes fairly simple to distinguish between them. 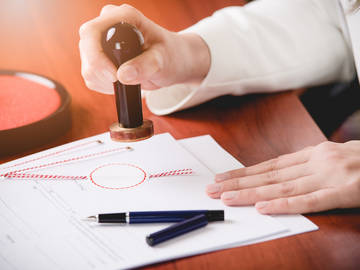 As an adjective, 'official' means "of or relating to an office, position, or trust." 'Officious' describes an annoying person who tries to tell other people what to do in a way that is not wanted or needed.

The words share a parentage in the Latin word officium, which could mean either “a helpful act,” “duty or obligation,” and “a person’s regular employment or position.” Officium gave rise to two distinct words in Latin, each one of which subsequently became one of these two English words under discussion here. Officiosus came from adding the suffix -osus, indicating “full of,” and the word took the meaning of “eager to serve or help.” The suffix -alis (meaning “relating to”) when added to officium brought about the word officialis, which in Latin initially had the meaning of “relating to duty or obligation,” and later took on the meaning of “a magistrate’s assistant.”

When officious came into English, in the 15th century, it retained the meaning that it had had in Latin. The earliest sense of the word was “dutiful,” but it also had the meaning “eager to serve or help” at about the same time. It did not take long, however, for the word to take on the additional, and now most common, meaning (“volunteering one's services where they are neither asked nor needed”); there is evidence that this sense was attached to officious by the end of the 16th century.

Official came into English somewhat earlier than officious; it has enjoyed a wider range of meanings and seen greater popularity than its meddlesome cousin. The earliest use of official, beginning in the 14th century, was as a noun, referring to a person who has been appointed to an ecclesiastical court. It began to see use as an adjective soon after, with the now-obsolete meaning of “performing a function or service.”

If you are uncertain about how to distinguish between these two words there are a couple of ways to tell them apart. The first, and most obvious one, is that officious will typically only function as an adjective in English, and not as a noun; official, on the other hand, hopscotches between these parts of speech with aplomb. Additionally, words that are formed with the -osus suffix (as officious is) tend to be more likely to be used to describe unfortunate characteristics than those words that are formed from the -alis suffix. The former group includes such specimens as contentious, bilious, flagitious, and meretricious; the latter group includes such specimens as fiscal, hebdomadal, and littoral.

It is perhaps a stretch to say that one is incorrect in using officious as a synonym for official, since the word did indeed have that meaning at some point in the past, and there are many instances of writers in English referring to “officious capacity” or “officious role”. However, it is highly anachronistic, and if your goal is to be readily understood you are advised to eschew this use in your writing.

In the event that you still have trouble keeping these two words straight in your mind, we offer the following limerick.

An official may well be officious,
(or tendentious, even malicious)
While the words may share roots
They are not in cahoots
And conflating them would be injudicious.