The Culinary Roots of 'Farce'

It's related to something called 'forcemeat'

Farce is a word with a curiously culinary history. The word today is most often applied to certain forms of broad or light humor, but its roots are in the realm of cookery. 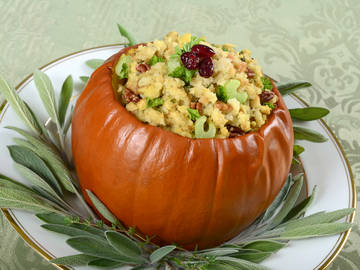 'Farce' ("the broad humor characteristic of farce" or "an empty or patently ridiculous act, proceeding, or situation") is related to the word for a kind of stuffing, 'forcemeat'.

The earliest uses of this word in English, dating to the 14th century, utilize it as a synonym for forcemeat (“finely chopped and highly seasoned meat or fish that is either served alone or used as a stuffing”). Farce was borrowed by English from the French, in which language it had the same meaning as its initial English one. The French use of this word (as a noun) is thought to have descended from the classical Latin verb facire (“to stuff”).

The stuffing sense of farce still exists today, although it is typically only found in cookbooks. We can see additional traces of this word’s roots in a handful of English words. Noah Webster, in his first unabridged dictionary of 1828, defined the word farctate as “stuffed; crammed, or full; without vacuities,” (he specified that it was a botanical term. And infarct still exists as a medical term, meaning “an area of necrosis in a tissue or organ resulting from obstruction of the local circulation by a thrombus or embolus.”

Our use of farce to refer to comedic material, while related, does not come directly from the culinary sense of stuffing. In France and Spain, between the 13th and 15th centuries, it was a common practice to write in by hand certain vernacular phrases in liturgical texts. This was referred to by the French as a farce (the English version of this particular word, spelled as farse, still exists, although it is fairly obscure). The use of these additions was greatly diminished by the end of the 16th century.

By this time the French had already begun to use farce in a broadened sense, in reference to actors interpolating comedic buffoonery into religious plays. By the time the theatrical sense of farce caught on in English, which was in the 16th century, it was used to refer to a dramatic work (usually short), the sole purpose of which was to elicit laughter. By the time the 18th century arrived farce was being used in a more general sense, with the meaning of “an empty or patently ridiculous act, proceeding, or situation.”

Oddly enough, farce is not the only English word descended from food which has seen service in the world of theater. Satire, which entered our language in the early 16th century, has always been used to refer to a caustic or lampooning form of writing (in novels, plays, and poetry); but the word is thought to be traceable to the Latin phrase lanx satura (“a full plate”). The word satura is itself a form of satur, which means “full or food” or “sated.”

It would be somehow pleasant if farce etymologically lived up to its name, and somehow had travelled an absurd and burlesque route to its modern use (perhaps by Tudor-era actors force-feeding each other stuffing in the middle of a play), but the truth is that, as with so many other English words, its path wended along somewhat more pedestrian lines.