Spill it, sip it: just make it hot.

If you're on the Internet at all, you've likely seen the meme of Kermit the Frog sipping a cup of tea. In fact, it's so popular that it has its own category on the GIF repository Giphy.com, and the famed frog himself has commented on it:

#ItsNotEasyBeing meme... But that's none of my business.

But Kermit isn't the only one with a cup. Plenty of skeptical people on Twitter sip tea:

More than halfway through it, and it's quite good. A more personal Clinton than we've seen - frank and ready to spill all the tea. https://t.co/TP9kC6GOGQ

and call it out when it's weak:

Pretty weak tea. Manafort’s lawyer say the real problem is not that prosecutors have a potential crook’s data - it’s that we know about it. https://t.co/Et1RH3hncG

All well and good: but what's it all about? 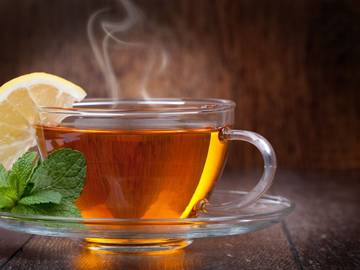 As we see with many slang words that take off on the Internet, tea didn't originate online. But it does share an origin point with many other common terms being passed around social media.

Like shade before it, tea originated in drag culture, and specifically black drag culture. When it was first popularized in general print, it could be spelled T or tea and it didn't refer to the drink. One of our early print uses of T comes from John Berendt's nonfiction best seller, Midnight in the Garden of Good and Evil. In it, he is interviewing The Lady Chablis, a prominent drag performer in Savannah, about her dating life, and she notes that she avoids certain men because they're prone to violence when they "find out her T":

Chablis' interviews in Berendt's book gave the world a peek into the vocabulary of black drag culture. T here is short for truth, and her truth is that she's transgender. (It's worth noting that Chablis herself uses the letter T instead of the word tea in her 1997 autobiography, and glosses it as "my Truth.")

It appears that T, also spelled tea, had a double-edged meaning in black drag culture. It could refer to a hidden truth, as Chablis uses it, and it could also refer to someone else's hidden truth—that is, gossip:

Straight life must be so boring. Because everyone conforms. These gay kids carry on. ... They give you dance and great tea [gossip].
— "Nate" quoted in One of the Children: An Ethnography of Identity and Gay Black Men, William G. Hawkeswood, 1991

As drag culture—and particularly black drag culture—gained prominence, so too did this dual meaning use of tea. It's spread far beyond black drag culture at this point. The phrase "spill the tea," used as an encouragement to gossip, has been used in everything from Harlequin romance novels to "RuPaul's Drag Race"; "no tea, no shade" has been featured in explainers on black gay slang; comedian Larry Wilmore used "weak tea" regularly on his 2015-16 Comedy Central show in response to people who weren't telling the absolute truth.

And, of course, tea has shown up on social media in a plethora of reaction memes, GIFs, hashtags, BuzzFeed listicles, and even a meta take on the 2015 show "Scream Queens". (Whether that last one is a positive or a negative is up to the individual reader.) For now, we're letting it steep.