Bugle calls did not originate as music but as communication. Their purpose was to convey orders across distances outdoors. Whether troops were marching in a column, camping on a hillside, or fighting during a battle, a bugle call could be heard and understood by an entire regiment at once. The same could be said for the use of drums in the military, and there are similarities: since only a few different pitches could be played on a bugle, the rhythms are what chiefly distinguish one call from another. 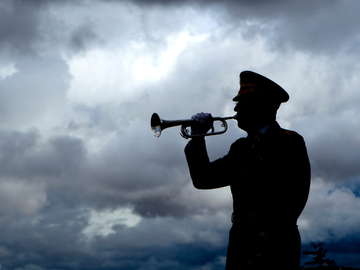 The tradition of playing taps at military funerals is said to have begun during the Civil War, when the opposing front lines were near enough to each other that the firing of three volleys at a burial, still an American military tradition today, may have caused the enemy to think an attack was underway.

Civil War bugle calls were adapted from those used during the Napoleonic era in France. Two of the most familiar, if only from old movies, are Reveille and Charge. There were calls for every soldierly activity, including Mess, Assembly, Retreat, To Horse, To Arms, and even Fix Bayonets.

General Daniel Butterfield of New York took a special interest in the bugle calls used in his regiment. He had even devised a special short call that was played before the familiar regulation calls, so that the men of his regiment would be certain that a given call—and consequently the order—was intended for them in the confusion of battle.

Butterfield wanted to change the call used to announce a safe end of the day, Lights out, based on a French bugle call reputed to be Napoleon’s favorite. Butterfield felt that the call was too stiff and formal, and wanted to create one that better conveyed rest by using longer notes rather than the short staccato notes typically used in bugle calls. Working with his bugler, Oliver Wilcox Norton, he revised an older call in July 1862 that formed a simple and elegant melody, using 24 notes and only four pitches. Norton played it at the end of the day, and other Union buglers quickly adopted it. Subsequently, lyrics have sometimes been added to the tune and used in summer camps at the end of the day, the best known being “Day is Done.”

That melody, taps follows tattoo, the drum signal or bugle call that orders soldiers to return to quarters and prepare for bed. The names for the two calls have the same origin: the word tattoo derives from taptoe, the Dutch word meaning “taps shut,” which was used to tell tavern keepers to stop serving beer to soldiers, who had to return to their camps. (This tattoo is unrelated to the ink-on-skin tattoo, which comes from the Tahitian word tatau.) It’s possible that the call’s name taps came directly from a different kind of “taps” altogether: the “drum taps,” or signal heard by many soldiers to indicate that it was time for “lights out” when no bugler was present.

The tradition of playing taps at military funerals is said to have begun during the Civil War, when the opposing front lines were near enough to each other that the firing of three volleys at a burial, still an American military tradition today, may have caused the enemy to think an attack was underway. The solemn bugle call replaced the volleys. Today taps usually follows the volleys at military funerals, as it did for what was perhaps the most famous rendition of taps, at the funeral of John F. Kennedy. The Army bugler Keith Clark slightly missed the sixth note of taps, and many listeners concluded that the mistake, most likely made because of the cold weather, added a choked or sobbing emotion to the performance of the dignified call.