Keeping tabs on a back-formation. 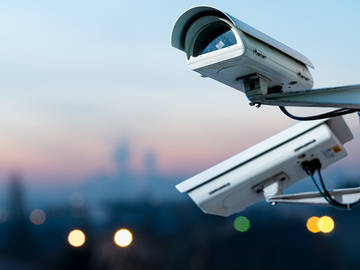 Words can be formed in a number of different ways. They can be invented by a writer (as with serendipity), come from adding onto an existing word (revolutionize, or even be formed by mistake. Yet another method of creating words is through back-formation.

A back-formation is “a word formed by subtraction of a real or supposed affix from an already existing longer word.” Occasionally these attract opprobrium; words such as burgle, emote, and liaise are looked at askance. However, there are hundreds and hundreds of back-formations in English, and most of them are accepted into the language with little or no trouble. An example of a back-formation that failed to raise hackles is surveil (“to subject to surveillance").

Surveil is shortened from surveillance (“close watch kept over someone or something, as by a detective”). This longer word comes from the French surveiller (“to watch over”), and our earliest evidence of its use is in relation to a close watch in the French Revolution.

The Committee of Surveillance proposed that 19,400 livres in money, stopped on the frontiers, should be forwarded to a merchant at Ath, whose property is was.
— London Chronicle, May 5-8 1792

Surveil itself came into English around the middle of the 19th century, and often in early citations is found used of the military or police. In some instances the word is used merely in the sense of ‘watch; look at,’ and in others it has taken on the more specific sense of ‘watch; keep tabs on.’

They would be a surveilling honorary body, as intended, and the office would be filled by an executive at all times competent to discharge the duty.
— Manchester Weekly Times (Manchester, Eng.), 13 Mar. 1849

With respect to the first, it appeared to him to be a most difficult line to draw between “dodging” a prisoner and surveilling him. The rule was to instruct the police to “keep their eye” on those men.
— The Morning Chronicle (London, Eng.), 10 Mar. 1855

They marched to battle surveilling each other, mutually exciting each other, and promising each other to render testimony to their patriotism, their valour, and their death.
— Reynold’s Miscellany, (London, Eng.), 8 Jun. 1850

It is unclear why some back-formations are freely adopted into our language and others are viewed with suspicion. It seems possible that words which are felt to fulfill a need are more readily accepted. If this is the case, then in today’s increasingly surveillance-heavy environment, with our proliferation of cameras and recording devices, the word surveil is bound to be linguistically useful indeed.