In 2000, the rapper Eminem released The Marshall Mathers LP, which contained "Stan," a track spanning almost seven minutes in length and telling the story of a young fan's obsession with his favorite rapper, Slim Shady (Eminem's alter ego). 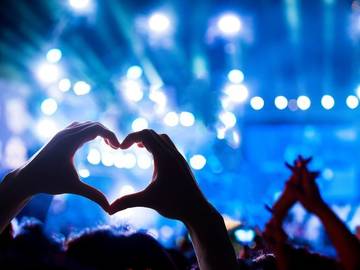 Any other Slim Shady is, of course, just imitating.

Taking the form of three fan letters increasing in intensity and desperation, "Stan" is told from the point of view of Slim's "biggest fan," a young father-to-be who claims he has "a room full of your posters and your pictures, man" and even "a tattoo of your name across the chest." The singer Dido contributes a guest vocal to the chorus that reiterates how the man's fandom "reminds [him] that it's not so bad." The young man speaks of aspects of a hard upbringing that he shares with Slim and yearns for some kind of acknowledgment from his idol. When Slim doesn't immediately reply to the young fan's letters, the fan becomes indignant:

It's been six months and still no word – I don't deserve it?
I know you got my last two letters
I wrote the addresses on 'em perfect

The man's last letter suggests that, in his anger at Slim's apparent rejection of him, he has committed a horrific act of violence.

The song became a number-one hit for Eminem in England and was included among Rolling Stone magazine's 500 Greatest Songs of All Time.

The following year, the rapper Nas referred to the song in his diss track "Ether," accusing Jay-Z of being a "stan," or obsessed fan, of Nas (as well as the Notorious B.I.G.).

Stan has subsequently entered the lexicon to refer to a fan whose admiration borders on obsession, often with a desire to enter into the admired person's circle and to control other people's impressions of that person. There is a suggestion of subservience in the relationship, though when one is labeled a "stan," it is often worn as a badge of honor.

The highlight of this year's NBA Finals wasn't Steph Curry's free throws or Lebron James' dunks — it was Rihanna, who is arguably the highlight of every event she attends. The pop singer has famously been a stan for James and the Cleveland Cavaliers, and she stole the show when she arrived during Game 1 yelling "brick" at Kevin Durant's free throw attempts and dabbing on fans of the Golden State Warriors.
— Martha Tesema, Mashable, 13 June 2017

In a 2007 interview, J.K. Rowling opened up about Albus Dumbledore's sexuality and confirmed that the Hogwarts patriarch is, in fact, gay. The revelation has been a subject of fodder among Potter stans for years.
— Christopher Rosa, Glamour, 10 Nov. 2016

The fan in the song is named Stan, and while that is ostensibly the origin of the word, the fact that stan can also be read as a portmanteau of stalker and fan is not a coincidence.

One is just as likely to encounter stan as a verb meaning "to be a devoted fan" or "to express admiration or zeal for something in an intense way":

Pop fandom has historically been embodied by the screaming white girl. But the rise of queer men “stanning” for pop divas signals the growing power of fan perspectives outside the straight white norm.
— Pier Dominguez, Buzzfeed News, 21 Sept. 2017

I stanned pretty hard for Christina as a teen; I remember begging my mom for tickets to the Justified/Stripped tour, and even from our nosebleed seats, Christina's voice was stunning.
— Alexandra Fiber, Racked, 22 June 2016

Just how intense must one's fandom be to qualify as a stan? Depending on whom you ask, unwavering loyalty or enthusiasm might not be enough. Social media is now full of people identifying themselves as stans, and as University of Wisconsin-Madison professor Jonathan Gray tells Mark Peters of the Boston Globe, the label comes with "a big corrective impulse," such as when one decries the latest installment of a film franchise as being inferior to the original or untrue to the creator's vision.

Whether a movie is an abomination or not may be outside the purview of a dictionary, but as for terminology, time will tell if we stand for stan.