New words and senses can emerge from the farthest reaches of the imagination and find a home in the English language. Some seem to come from the ether.

The word ether conjures a number of images. It can refer to the upper regions of space. It was once used as the name of a common surgical anesthetic. And it can refer to radio airwaves, as when a signal comes over the ether. 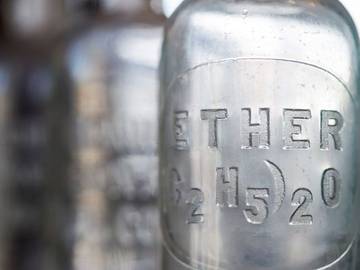 In recent years we are seeing a new sense of ether as a verb meaning "insult or humiliate publicly":

Anthony Scaramucci, a finance guy or something who doesn’t seem to understand anything about being a press flack, called the New Yorker’s Ryan Lizza last night and ethered every one of his White House enemies in one of the greatest and most surreal interviews in American political history.
— Patrick Redford, Deadspin, 27 July 2017

But Mike Pence was largely left alone, until I saw the sign above. Mr. Vice-President, sir: You just got ethered.
— Jake Swearingen, New York Magazine, 22 Jan. 2017

So where did we get this ether? And are we talking about space or surgery here?

"Ether" is the title of a 2001 song by the hip-hop artist Nas, written as a response to another song, Jay-Z's "Takeover," which lobbed insults at Nas and fellow rapper Prodigy for what Jay considered their mediocre careers. Both "Ether" and "Takeover" are categorized as diss tracks, or songs meant to slam other artists.

Nas explained the reasoning behind the title "Ether" to the New York Times in 2002:

In an interview, Nas said he titled the song "Ether" because he wanted his words to burn his rival's spirit. "I was told a long time ago, ghosts and spirits don't like the fumes from ether, and I just wanted to affect him with my weapon and get to his soul," Nas said.
— Douglas Century, The New York Times, 6 Jan. 2002

The song, which finished second in a 2017 Rolling Stone Readers' Poll of the best diss tracks of all time, was received with great acclaim and is credited with revitalizing Nas's career. Shortly after its release, ether began to see use as a verb along the ranks of own, savage, and throw shade, all of which refer to the act of leveling criticism to another in a public way that is intended to humiliate; ether adds to that meaning the effect of leaving the target of such criticism at a loss for response. And now it's out there, in the air, for Jay-Z and everyone else to breathe in.