Featuring Spoonie Gee, the one MC who you can't deny

For several hundred years now, slang has been met with an odd combination of fascination and disapproval from the public, no matter where it arises. New terms pop up constantly; some trail off quickly while others stand the test of time. One such word, which started in the jargon of youth but has traveled considerably ever since, is dis. 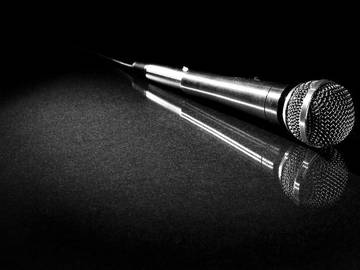 The word dis (occasionally spelled diss) found itself widely explicated in the 1980s, frequently glossed in newspapers in lists of slang or in articles on the then-new phenomenon of rap music. A 1988 compilation of “contemporary terms” published in The Los Angeles Times offered up “Dissed (to get) — to get put down, ‘disrespected.’” In subsequent articles the word was often defined as part of the story.

The host of the weekly rap music show “Breakers Delight” on WDCU-FM, Rodriguez said that after years of being disrespected or “dissed” by listeners who preferred homegrown go-go music to “all that New York stuff,” rapping has finally caught on.
— Lyle V. Harris, The Washington Post, 1 Sept. 1986

”There are a lot of words that are abbreviations of first syllables,” Schultz said. “Like ‘def’ which is is short for ‘deft’ (or ‘definitely), which means cool or great or anything that’s really terrific. Then there’s ‘dis’ as in ‘don’t dis me in front of everybody.’ I said, what? Dish? They said, don’t you know what ‘dis’ is? Disrespect”
— Wayne Robins, Newsday, (Long Island, NY), 20 Oct. 1985

Dis had begun being used as a transitive verb some time prior to the above citations; the earliest citation found in The Oxford English Dictionary references Spoonie Gee’s 1979 Spoonin’ Rap, and spoken use would certainly have preceded this by a number of years. The longer form of the word, disrespect, is not itself new, with use dating back to the early 17th century.

We must not in honour of God, adore the creature with honour equalling the worship of God; for in seeking thus to honour God, we shall dishonour him; reproach him by such worship; by such respect disrespect him; neglect him by such seruice….
— Pierre Du Moulin, A Defence of the Catholicke Faith, 1610

…and that the calling of this wretch (meaning her that had the diuels in her bodie, to wit, Louyse de Cappeau) had been debased and exposed to derision, as also dishonoured and disrespected by the diuels, who would haue waded further into these aduantages, if they might be suffered.
— Sébastien Michaelis (trans. by W. B.), The Admirable History of the Possession and Conversion of a Penitent Woman Seduced by a Magician that Made her to become a Witch, 1613

Given that dis came from African-American vernacular use, and was often found in the dialect of youth (two areas which have frequently been overlooked in linguistic examination), it is notable that we have mainstream writing about the word as early as we do. The word has had a meteoric rise, moving within a few decades from highly regionalized to global use.

No amount of free festive booze could soother the wounded hearts of dissed hacks, though there have been many willing to take up the challenge.
— Barbara Ellen, The Observer (London, UK), 15 Oct. 2017

And although most dictionaries still label this word as ‘slang’ or ‘informal,’ there is increasing evidence of it beginning to be used outside of these confines.

But since anyone can be likened to such personae, whether praised as yere or dissed as gaou, these terms formulate geosocial tropes (not localebound identities) that enable status ranking even among persons who live in the same locale, and even the criteria by which someone can be formulated as gaou can differ among residents of the same locale.
— Asif Aha, “Tropes of Branding in Forms of Life” (Signs and Society), 2015

We seldom note articles here - see the MLA Bibliography for that - but this one calls for an exception that feminists, and others, may appreciate, a notice of Renaissance women of considerable érudition rather than, say, still more about rather undistinguished women dramatists such as the author of The Tragedy of Miriam, recently much touted, here maybe too often dissed.
— Leonard R. N. Ashley, “Recent Publications on Elizabethan England and Related Fields” (in Bibliothèque d'Humanisme et Renaissance), 2013

Especially when compared to other new instances of slang from the 1980s (some other words defined in the aforementioned LA Times article include heel-toe express, meaning “walking,” and full hanks, meaning “nerds”), dis is clearly a word that has demonstrated staying power. Given its increasing breadth of use, we may even see it lose its slang designation before long.