March 17 is St. Patrick's Day—the feast day of the patron saint of Ireland who is credited with bringing Christianity to the island (and is the legendary figure said to have driven the "snakes" of Ireland into the sea). Typically, a feast day of a canonized saint is only referred to by the saint's given name, in this case Patrick.

However, St. Patrick's Day has evolved to become more than a religious observance; it is a secular celebration of Irish heritage and pride in the form of festivals and parades, as well as more than a few pub crawls. Many people (not just the Irish) get into the spirit of the day by dressing in green, eating corned beef and cabbage (a tradition from Irish immigrants in America), and drinking Irish beer. The festive atmosphere has influenced partygoers to refer to the day informally by nicknames of Patrick, but one name tends to raise the hackles of many celebrants, be they Irish by heritage or just for the day. 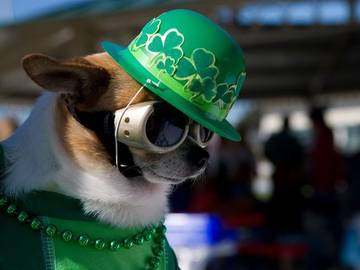 If this dog could read, she'd tell you the same thing.

We'll start with the names people like. Patrick is the Anglicized form of Pádraig, nicknamed Páidín and Paddy.

It's from the Irish name that "St. Paddy's Day" was formed, and being Irish-based, it won't cause a stir if you use it at a pub (but probably stick to his full name at church). Another acceptable familiar name is "St. Pat's Day," in light of Pat being a common English nickname of Patrick. But then there is "St. Patty's Day," the shortening that dyed-in-the-wool Irish—and, we're guessing, a few onomasticians—find objectionable.

The Problem With "Patty"

Patty as used in "St. Patty's Day" developed either as a playful diminutive based on the masculine nickname Pat or as a misapprehension of the "d" in Paddy. Whatever the case, the name Patty is generally understood to be the feminine form of Patricia, and is, thus, considered by many to be disrespectful (or at least just straight-up wrong) when used for the day commemorating Ireland's patron saint.

Some people also find "St. Paddy's Day" inappropriate because, since the 18th century, Paddy has been used in English as a disparaging name for an Irishman or, in informal British English, as "a fit of temper." For those who wish to avoid Paddy because of its offensive use, that's understandable. But we do recommend that you replace it with either "St. Pat's Day" or the formal "St. Patrick's Day," and reserve use of patty for ordering a melt, grabbing some peppermint candy, or having a chat with your friend Patricia.