On the off chance you need to learn the difference

A snollygoster is a shrewd, unprincipled person, whereas a snallygaster is a mythical bird-reptile hybrid associated with rural Maryland. Although the words look similar there is little evidence to suggest an etymological relationship. 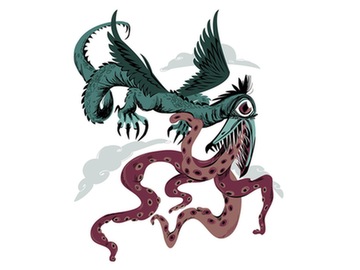 Now, which one is this again?

Many of us, whether we care to admit it or not, find it troublesome to differentiate between the proper use of affect and effect (if this issue bedevils you help may be found here). Others tend to have confusion when using enervate or energize. If you have mastered these, and need a better couplet for those moments around the campfire when everyone starts talking about the words they always have to look up, allow us to present to you snallygaster and snollygoster.

These words have very little semantic overlap; a snallygaster is “a mythical nocturnal creature that is reported chiefly from rural Maryland, is reputed to be part reptile and part bird, and is said to prey on poultry and children,” and a snollygoster is “a shrewd, unprincipled person.” Despite the fact that the definitions are considerably different the words are occasionally mixed up, largely on account of fact that they look similar to each other, and dissimilar to pretty much every other word in English.

Many people feel that the words are connected; it has been suggested that snollygoster comes from snallygaster (which is thought to be from modification of Pennsylvania German schnelle geeschter, literally, quick spirits). One of the problems with this theory is that our evidence for snollygoster comes well before that for snallygaster; the former dates to the 1840s, while our earliest use of the latter comes in 1900 (in what appears to be a misspelling of snollygoster).

Now here I am, a rale self-propelling double revolving Snolly Goster, ready to attack anything but a combination of Thunder-lightning-smoke-railroad-iron, and hot water. I’d like for some of your gals to give me a chance to play Hop Scotch among your hearts, and if I don’t play the swill barrel game by walking right strait through your tarnel prejudices into young affections, then help me Jozey.
— Arkansas Intelligencer (Van Buren, AK), 25 Oct. 1845

Snollygoster comes up in the mid-19th century, and within a few decades finds itself mostly used in political settings (often describing someone who is particularly interested in elected office).

We see that “R. Cole Foster, the Snolly-goster,” is one of the nominees for the State Senate. He had better stay at home; there will be no person at the Capital, next Winter, to properly take care of his morals.
— White Cloud Kansas Chief (White Cloud, KS), 25 Oct. 1866

Yer house’ll be surrounded by the snolly-goster men.
An’ they’ll snake you through the winder ‘fore you know what you’re about.
— Buffalo Morning Express (Buffalo, NY), 25 Jan. 1890

Snallygaster, on the other hand, does not begin to make regular appearances until the 1930s, and initially is primarily found in Maryland.

Both state that the ‘Snallygaster’ appeared suddenly from the south and was flying not more than twenty-five feet in the air, which afforded them an excellent view of the monster.
— The Evening Sun_ (Baltimore, MD), 25 Nov. 1932

Whether International League magnates have been seeing snallygasters or a flock of bovalopi is not clear but the fact that they are considering a brand-new departure in the method of determining the league champion at the close of the season indicates they have been seeing something unusual.
—C. M. Gibbs, The Sun (Baltimore, MD), 30 Nov. 1932

If you need some mnemonic to aid you in keeping track of snollygoster and snallygaster you may simply remember that the second portion of snollygoster (goster) is also a dialectal British word meaning “to waste time conspicuously especially by talking and gossiping.” And the second portion of snallygaster (gaster) is “the enlarged part of the abdomen behind the pedicel in hymenopterous insects (such as ants).”

(Please note that we did not say it would be a good mnemonic.)