'Has Your Mother Sold Her Mangle?' Slang and the Dictionary

Part Two: Slang in the Dictionary

We get a lot of hate mail from people who think slang doesn’t belong in the dictionary. Comments on our definition for OMG include “I am a high school English teacher and heard that this was added to the dictionary and hoped that I heard incorrectly.” and “The human race is heading somewhere very sad.” These people are barking up the wrong tree: We follow language and delight in tracking its changes. 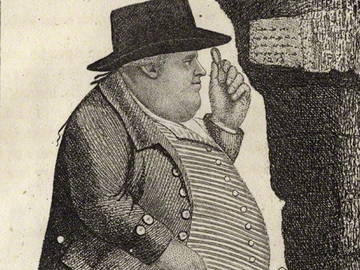 To find the words that hadn't yet made it into print, Grose hung around the slums, drinking dens, and dockyards of London, always with an ear to catching the latest and most up to date language.

They’re also kidding themselves about the way language works. A casual glance at this list of words considered slang in 1916 (which includes kid, grouchy, fake, and awful) makes it clear that many words we consider standard today were slang at one point. For crying out loud, won’t was once described as “absolutely vulgar”! Language evolves, and so does the dictionary.

The truth is that lexicographers have been studying slang for hundreds of years.

Slang wasn’t in the earliest dictionaries

...yet slang crept in quickly

Elisha Coles’s An English Dictionary (1676) was still mainly composed of hard words, but it also included a number of slang and cant terms. Knowing that some might look askance at the inclusion of these words, Coles gave a short explanation in the introduction to his book: “‘Tis no disparagement to understand the Canting Terms. It may chance to save your throat from being cut, or (at least) your Pocket from being pickt.” In other words, slang could save your life—or your wallet.

Did Coles actually think that knowing the language of pickpockets would protect people from being robbed? It’s unlikely, but it was a respectable excuse for putting slang in a dictionary, and it might have protected him from a few hostile Internet comments, if the internet had existed back then. This ridiculous insistence that dictionaries defined slang as a kind of public safety message continued for roughly a century; the first dictionary of slang, the anonymously published A New Dictionary of the Terms Ancient and Modern of the Canting Crew (1690), stated on its title page that it was “Useful for all sorts of People, (especially Foreigners) to secure the Money and preserve their lives….”

Studying slang was a lot harder before the Internet

Francis Grose didn’t pretend that his slang would save anyone’s life. When he published A Classical Dictionary of the Vulgar Tongue in 1785, he just bragged that he had words readers wouldn’t find “in all the ordinary Dictionaries.” But in 1785, Grose didn’t have access to most of the tools we use to research new words today. He couldn’t search a database for examples of new words in use. For Grose, lexicography involved a lot more legwork.

Research in the slums

To find the words that hadn’t yet made it into print, Grose hung around the slums, drinking dens, and dockyards of London, always with an ear to catching the latest and most up to date language. These were skeevy places, and Grose visited them late at night; in the introduction to his book, he wrote that his words words “have been drawn from the most classical authorities; such as soldiers on the long march, seamen at the cap-stern, ladies disposing of the fish....” The work paid off: some of the words Grose first recorded as slang more than two centuries ago, like babble, are completely standard English words today. Others, such as scum (“the riff-raff”), still have a tinge of slang about them.

Slang can be short-lived

But many of the words Grose recorded are unknown today. Consider admiral of the narrow seas (“one who from drunkenness vomits into the lap of the person sitting opposite him”). This useful, delightful term seems to have disappeared from English entirely. Charles Mackay, in his 1841 book Extraordinary Popular Delusions and the Madness of Crowds, wrote of a pair of phrases that were of considerable popularity in early 19th century London: “What a shocking bad hat!” and “Has your mother sold her mangle?” The phrases failed to capture the public imagination for long, were infrequently recorded in published material, and subsequently have faded, largely unrecorded, from view.

This is why dictionaries won’t add a new word until someone can prove it has widespread, frequent, meaningful usage

There is an enormous body of language that has simply never been recorded in any dictionary, having failed to meet lexicographers’ criteria for inclusion. But as lexicography has shifted from being prescriptive (describing how words should be used) to descriptive (describing how words actually are used) there has been a gradual acceptance of slang in general dictionaries. If a word has widespread and prolonged use with a definite meaning, it will be added to the dictionary.

Once it’s in the dictionary, it may remain slang. Or—like grouchy, fake, and babble—it may become a part of standard English.

If you have a slang term that is not yet recorded in a dictionary, and you feel that it should be, all you have to do is ensure that the word is used by some portion of the English-speaking people (ten or twenty million people ought to do), most of whom use it in a fairly similar fashion (preferably in some written form). Once you’ve done that, just drop us a line and we’ll think about it.

Tomorrow: The Internet and the Dictionary

Want to detect slang in your writing? Try Grammarly for free!