For reasons that confound the humble lexicographer, some people have quite a beef with conjunctions. Specifically, people seem to be confused about which kinds of conjunctions you can use where. 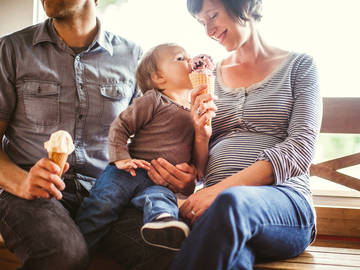 What are we to make, some usage mavens would say, of the sentence "We had dessert since he had bought ice cream"? A solid question that is mostly irrelevant in the real world.

We have no dessert in the house because you ate all the ice cream last night.

Because is the conjunction that gets the most use, but there are a few others in use--much to the consternation of usage commentators of the 20th and 21st centuries. The two causal conjunctions that get the most ire from grammarians are since and as.

Since is used as a causal conjunction (and has been since the 16th century) in the same way that because is used:

Since you ate the ice cream last night, we don't have any dessert tonight.

Usage mavens of the 20th century rejected this use. Since as a conjunction can refer both to causation and to the passage of time ("It's been two weeks since we've had any ice cream in this house"), and the mavens believed strongly that since there's potential confusion over which meaning of since is meant, one should avoid since as a causal conjunction. What are we to make, they would say, of the sentence "We had dessert since he had bought ice cream"? Is the writer saying that after he bought ice cream, they had been steadily having dessert? Or is the writer saying that because he bought ice cream, they had dessert?

These mavens asked a solid question that is, nonetheless, mostly irrelevant in the real world. Such instances of ambiguity are few and far between in actual use: sentences tend to appear surrounded by other sentences, and this context often makes it clear whether the writer is using the causal since or the time-related since. We've used a few sinces here, and it's probable you didn't stumble over them at all.

There is a subtle difference between since and because, however: since expresses a milder degree of causality than because does.

Since doesn't get all the ire. The conjunctive as gets dumped on even more. The conjunction as has a number of meanings and uses, including both one that marks time (“We had dessert as we watched TV”) and causation (“We had dessert, as we had ice cream in the house”), and both of these uses are over 1,000 years old. The time-related meaning of as is more common than the causal meaning of as¸ and for this reason, usage commentators still advise against it:

In the causal sense, as should generally be avoided because (not as!) it may be understood as having its more usual meaning “while,” especially when it is placed anywhere but at the beginning of the sentence.
—Bryan Garner, Garner’s Modern English Usage, 4th ed., 2016

Sound advice. And yet our research shows that, in real life, conjunctive uses of as are rarely confusing. Just like since, the conjunctive as rarely appears in a sentence that is contextless, and the context can often help disambiguate the meaning of as. Here are some real-world examples of the conjunctive as. See which ones trip you up:

THESEUS. Oh! then as I'm a respectable man, and rather particular about the company I keep, I think I'll go
—W. S. Gilbert, Thespis, 1871

... I shall prepare my most plaintive airs against his return, in compassion to his feelings, as I know his horse will lose.
—Jane Austen, Mansfield Park, 1814

Indeed, some jurors confirmed later that day that they wished they had been given the manslaughter option as they didn’t believe the au pair intended to harm the baby.
—Kimberly Mills, Seattle Post-Intelligencer, 14 Nov. 1997

This last example is cited by Garner as an example of the ambiguous as, but that seems to be reading ambiguity into a sentence where there is none. It’s clear from the context that the as here doesn’t mean “while,” but “because.” As is much more formal than either since or because, but this is no reason to reject it as a causal conjunction.

What advice would we give? Since as a causal conjunction is almost unremarkable except to a few stick-in-the-muds, and is sometimes preferable when you want the cause to be less directly linked to the effect. As will garner more criticism if you use it as a causal conjunction, but if you need the formality of as, make sure that the sentence can’t be misconstrued at all by substituting in both because and while in your sentence. When in doubt, you can always default to because, since no one finds fault with it.