Almost all words in English, if they have been in use for long enough, have either changed meaning or taken on a number of additional meanings. In many cases this change is dramatic enough to necessitate a new definition; deadline went from meaning “a line drawn within or around a prison that a prisoner passes at the risk of being shot” to “a date or time before which something must be done,” and debacle went from “a tumultuous breakup of ice in a river” to “a great disaster,” each in under a century. Other words, however, may change meaning and applicability in gradual fashion, slowly enough that a somewhat broad definition may still cover the word. One such example of this is shutdown. 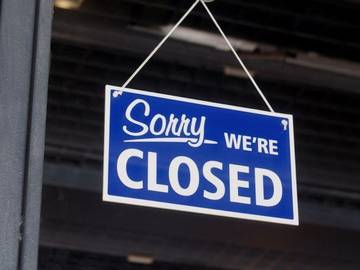 The sense of 'shutdown' which applies to a suspension of local or federal governmental services appears to have come about in the 1970s.

We define the noun sense of shutdown as “the cessation or suspension of an operation or activity.” This word, which has been in use for over a hundred and fifty years now, has picked up new shades of meaning, and situations in which it is applied, yet the above definition still applies to it in most cases where it is used today.

Shutdown began its life as a noun as an open compound (“a compound whose word components are separated by a space in printing or writing”) and later got rid of the space between its two parts, becoming a solid compound (“a compound whose components are solid in printing or writing”). This is a normal progression for many compounds, such as baseball and rowboat (which started as base ball and row boat).

The first part of this compound, the verb shut, comes from the Old English scyttan; the latter adverbial portion, down comes from the Old English word dūn (“hill”). Starting in the middle of the 19th century, the noun form of shutdown was used primarily to describe the cessation of activities of some financial institution (such as a bank), or business concern (such as an oil driller).

The Branch of the Union Bank here, we believe, continues to do a limited business weekly—not so much, however, as it would do, but for the “shut down” operation of the Planters.
— Eagle & Enquirer (Memphis, TN), 6 May 1854

Since then, finding he could not get the money, he gave orders to receive our business, providing the company will settle monthly. The chief operator at New Orleans, writing to Mr. Peckham, declares his ignorance of the “shut down.”
— The South-Western (Shreveport, LA), 13 Sept. 1854

The Oil City Derrick says the shut down has failed but the producers can congratulate themselves that everybody knew just how it was not of course natural that the project should succeed.
— Elk Advocate (Ridgway, PA), 28 May 1874

When did we begin using shutdown to refer to governmental activities, or the lack of such? Not for a number of decades after the word entered the language, and it did not take on the sense which is unfortunately common today until fairly recently. Shutdown has been paired with government since at least the 1940s, but the earliest examples we have are in reference to the government actually functioning, and the government shutdown is an enactment of regulations on the part of the government.

Florida racing fans, finally convinced there was to be no relenting of the government shutdown on turf activities, were planning to close Tropical park’s abbreviated eight-day meeting tomorrow with a prodigal farewell at turnstiles and parimutuel windows.
— Charleston News and Courier (Charleston, SC), 2 Jan. 1945

This record high in betting was achieved, although there were 221 fewer days of racing in 1945, because of the government shutdown of tracks in the transportation crisis early in the year.
— The Kansas City Star (Kansas City, MO), 10 Dec. 1945

In the 1950s government shutdown sees a new use; one in which a government is still performing a function, but the shutdown commonly referred to here is one of political suppression.

Mantilla was jailed Tuesday for protesting the government shutdown of two opposition papers in the city of Guayaquil.
— The Journal Star (Peoria, IL), 30 Apr. 1953

Little was known about today’s meeting, but it apparently was called in connection with the government shutdown of the student anti-Stalinist newspaper, “Pro Postu."
— Evansville Press (Evansville, IN), 7 Oct. 1957

U. S. Ambassador Walter Dowling has sent a protest to the South Korean government complaining that a Korean official refused to confer with two American diplomats inquiring about the government shutdown of an opposition newspaper.
— Arkansas Democrat (Little Rock, AR), 2 May 1959

In the late 1960s and early 1970s government shutdown began to be used in reference to the actual shutting down of governmental services, but before it was applied to a government shutting down due to budgetary concerns the shutdowns seemed to be done as memorials or as a result of the actions of others.

The Civil Service Commission, amplifying the White House announcement of the government shutdown, said employes (sic) will be given the day off on Monday. In addition, those at work Friday when Eisenhower died were authorized to have administrative leave for the remained of the day.
— Commercial Appeal (Memphis, TN), 29 Mar. 1969

Antiwar demonstrators shifted their protest to the Justive Department, where a top official called their government shutdown threat “a lot of hot air.”
— Wichita Eagle (Wichita, KS), 1 May 1971

The sense of shutdown which applies to a suspension of local or federal governmental services deemed non-essential appears to have come into play slightly later in the 1970s. Our earliest citations for this use indicate that the term was used for both state and federal shutdowns at about the same time.

Pressure to compromise was growing as the prospects of a federal government shutdown increase, and as members of Congress worry more about the July 4 recess which is scheduled to start this weekend.
— Evening Star (Washington, DC), 29 Jun. 1973

In the last several decades it has become increasingly common to find shutdown modified in some way by government. There are still other kinds of shutdowns, of course, but it seems possible that the cessation of governmental services will form such a preponderance of uses of this word that it will follow the example of debacle and need a new definition.