Or should you give up and find another word?

Until, till, and 'til are all used in modern English to denote when something will happen. Until and till are both standard, but what might be surprising is that till is the older word. 'Til, with one L, is an informal and poetic shortening of until. The form 'till, with an additional L, is rarely if ever used today.

We often find that people will ask how they should write until if they don’t want to use that actual word; should it instead be till or ’til? Or, for the orthographically adventurous, is ’till a reasonable choice? 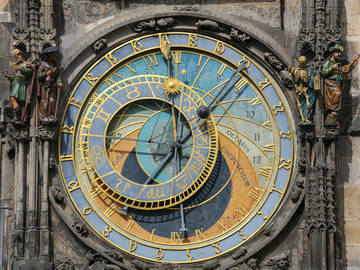 The Prague Astronomical Clock is over 605 years old. It is still not as old as the use of 'till' to mean "until."

'Till' is Older Than 'Until'

One reason for the confusion in this area is that many people assume that till is a misshapen abbreviation of until, a mistaken form in which the apprehensive spellers among us tack on an extra L at the end in order to make their word look a bit more balanced and give it some additional heft. However, till is not a shortening of until. It actually predates the longer word.

Till has been in use in English since the 9th century; the earliest sense of the word was the same as the preposition to. It has been used as a conjunction meaning "until" since the 12th century. Until has been in use as both a preposition and a conjunction for almost as long. Both of these words are acceptable; you may send a text to your misbehaving child stating either “U R grounded till 4ever” or “U R grounded until 4ever.”

Now what of ’til and ’till? These are viewed as somewhat more problematic. ’Till is entirely shunned by the writers of usage guides, when they see fit to mention it at all. Bryan Garner, in his Modern American Usage, refers to it as “abominable,” which is rather polite when compared to Harper’s Dictionary of Contemporary Usage, which says “the formation ’till is a bastard word and is substandard.” You would do well to avoid using ’till, unless you are trying to annoy some portion of your readers.

’Til is still viewed askance by many people, at least in formal writing. Although it had previously been thought to have begun being used in the middle of the 20th century a closer look at the historical record shows that this particular variant is quite a bit older than that. Til occurs on occasion in the early 19th century, but it is difficult to say whether or not this is simply a variant spelling of till (which was often written with a single L in Middle English). But by the late 19th century an apostrophe has been added to the beginning of the word, and it is found in widespread use (especially when a writer is attempting to replicate colloquial speech).

”Yes we will, Watty; we’re only going to wait ‘til they’ve got the house and furniture—and oh! Watty. What do you think?”
—The New York Observer and Chronicle, 22 Aug. 1872

”Wait ‘til you’ve been in a town like I have for some time,” said Eve.
—Temple Bar: A London Magazine for Town and Country Readers, Sept. 1880

Master-Workman Shaw was found this morning on the street, whistling “Wait ‘Til the Clouds Roll by,” and was tapped by the reporter for the latest developments on the strike situation.
—The St. Louis Post-Dispatch, 2 Aug. 1883

So there you have it: you will probably wish to avoid ’till, use ’til advisedly, and use both until and till freely. And if you use till in writing and someone tells you that you have made an error, simply take the extra L off the end of the word and poke them in the eye with it.