Logically, if things can self-destruct, they can probably be destructed too

This article will self-destruct when you have finished reading it.

OK, not really. We all know it's nearly impossible to destruct something once it's on the Internet. 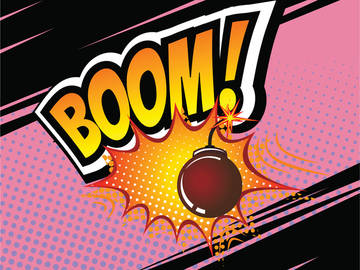 In modern use, 'destruct' is increasingly used as a simple synonym of 'destroy'.

Wait a minute: did we just say "destruct"? Yes. We did. And why not? Self-destruct is a word in good standing. Shouldn’t destruct be one, too?

Well, sure. And it is, sort of. Destruct was first entered in a Merriam-Webster dictionary in 1909. But it's never been common and some people object to it, unlike self-destruct, which pops up everywhere and seems to raise nary an eyebrow.

The earliest known examples of both destruct and construct date to the 1600s, but while construct has thrived, destruct saw a little use for a couple centuries and then fully ceded its territory to the synonymous destroy, which had been doing the job ably since the 1200s anyway.

But then the 1950s came along, and destruct reemerged in aerospace jargon. The old destruct was likely unknown to the first users of the new destruct. The new one almost certainly was coined by back-formation from destruction.

The revived destruct was not used in quite the same way as destroy. For one thing, within a decade it was being linked to self-, while destroy is not (except as a participial adjective in self-destroying). Destruct also carried the connotation of destroying for some positive purpose, such as safety:

... a $50 million weather satellite which was deliberately destructed on launch.
—The Sunday Republican (Springfield, Massachusetts), 19 May 1968

It still sometimes carries that connotation:

For years, use of destruct was tied to its 20th century origins, appearing mostly in aerospace and military contexts and in the occasional cloak-and-dagger story. This is no longer true. As a participial adjective, destructed now describes fashion partially destroyed for the positive purpose that is fashion:

Known for its destructed denim jackets, ironic sweatshirts, and kitschy knickknacks such as Polaroid cameras, the store was essentially the mass-produced version of the thriftstore find.
— Veronika Bondarenko, Business Insider, 28 Apr. 2017

And in modern use destruct is increasingly used as a simple synonym of destroy, which means it's come full circle:

Animal Control is only permitted to trap a fox if the animal is vicious, is destructing property or is posing a threat to public health, according to the N.C. Wildlife Resources Commission.
— Betsy Church, The News & Observer (Raleigh, North Carolina), 30 June 2012

As for self-destruct, that word owes a debt to the television series "Mission: Impossible," which ran from 1966 until 1973 (and then had a revival in the 1980s). The opening of each episode of the show included a tape of recorded instructions that burned itself up after the words, "This tape will self-destruct in five seconds." We have early evidence from technical sources for self-destruct used as an adjective (in "self-destruct mechanism," for instance), but not for the verb. The verb seems to have sprung full-grown from the heads of the "Mission Impossible" writers. The notion of self-destruction seemed to fill a need. The verb quickly became popular, established itself, and continues to prove useful:

… Snapchat, the popular app that causes pics and videos to self-destruct seconds after they are received.
— Michelle Cottle, The Atlantic, November 2014

Pretty productive for a destroyer.