What Does 'Scale the Business' Mean?

How a common word became a staple of business jargon

The scale of scale is changing.

Scale already has many meanings, and no wonder: each meaning has a different root. There's the noun scale (“a machine for weighing”), which comes from the Old Norse word meaning “bowl” or “scale of a balance”; this scale originally meant “cup” or “bowl” in English. 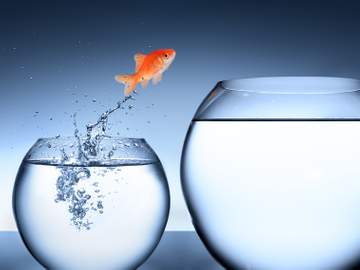 'Scale' is increasingly being used as shorthand for 'scale up' (“to grow or expand in a proportional and usually profitable way”) and as a noun that means "proportional growth especially of production or profit" and/or "a large market position."

Then there's the scale that means “one of many small thin plates that cover the bodies of some animals (such as fish or snakes).” This word comes from the French word escale (écaille in modern French), though both words have deeper roots that are shared with the origin of the word shell.

As for the scale that means “the size of something,” “a series of musical notes,” or “a range of numbers,” it comes from the Latin word scala that means “ladder” or “staircase.”

Scale is also used as a verb with meanings that correspond to nouns, but the most recent sense recorded in dictionaries is a synonym of “adjust,” as in scale back, scale up, or scale down:

We scaled back our vacation plans.

The company hopes to scale up production soon.

In the past few decades, scale up (“to increase the size, amount, or extent of something”) has been shortened to scale when used in business contexts. An early example shows them being used interchangeably:

“It's much safer to scale the company in relation to the leads you can generate than it is to hire new people to generate leads," says Balloon Works's Sidney Conn. "When we scale up, it's in manufacturing. Our sales staff can take on new orders without many new people."
—Hal Plotkin, INC’s Guide to International Business, Fall 1988

This newer use of scale means “to grow or expand in a proportional and usually profitable way.” The term was sufficiently new and specialized that it was explained in the text of an article about microfinancing:

He estimated that three hundred million heads of household represented the world’s 1.2 billion poorest people. It would cost sixty billion dollars. “And then you’re done! It’s not an annual number. Once it’s scaled”—that is, once it has expanded to its full potential—“it’s a self-sustaining, profitable model, which opens the door to reaching large numbers of people who need to be reached by this tool of access to capital.”
—Connie Bruck, The New Yorker, 30 October 2006

The same article also had examples the corresponding new use of scale as a noun and attributive noun that can mean both “proportional growth especially of production or profit” and “a large market position” (or simply “large”):

The idea of reaching billions of the poor by achieving “scale”—a word invoked ceaselessly in the microfinance community—has enticed foundations, rich individuals, even investors into channelling millions into microfinance.

“We don’t want to be the only M.F.I.s in the world. There need to be others. But if you look at the level behind us, there aren’t enough scale players. What’s going to make the difference there? Strategic investment of grant money, linked to investors who don’t have fixed demands on returns.”

“But she can sustainably provide important services that are helping to move people out of poverty in the heart of a very poor community. So shouldn’t she also have the ability to innovate and reach scale?”

It has clearly become a part of business jargon in phrases like “scale the business” and “to gain scale,” and these new uses of scale very well might spread into non-business contexts as well, though many current examples are packed with business clichés:

"Odus is a seasoned leader who has the experience and proven track record to continue to evolve our organization and drive nationwide growth for Q2," said Matt Flake, CEO of Q2. "He's a natural fit for Q2's culture, and we are thrilled to welcome him aboard and continue to scale our strong industry-leading sales, marketing and operations teams."

Q2 is driven by a culture of partnership and dedication to empowering community banks and credit unions with digital banking solutions that help them stand apart, scale smart and grow beyond with retail and commercial accountholders.
—Business Wire, 15 August 2016

Watch for scale to be used this way in discussions of things like vacation plans, turn-out-the-vote efforts, and exercise routines: that’s when we’ll know that we’re seeing a real evolution in the everyday use of this word. At that point, you won’t have to weigh whether or not to use it.