The Noisy History of 'Saber-rattling'

It's not just a bunch of bluster.

Our language is rife with militaristic imagery and metaphor. Some of the words we have imported from war are fairly obvious, and have traveled a direct route, such as blockbuster, which started out as “a very large high-explosive bomb” before taking on the meaning of “the way marketing executives describe a movie or product they want you to think of as successful.” Others have less obvious connections, such as deadline, which began its life as a descriptor of the perimeter of 19th century military prisons.

Many of these are fairly self-explanatory: a blockbuster is a bomb powerful enough to bust an entire city block, and a deadline is a line which, should you pass beyond it, will signify to the guards that they should shoot. But there are other terms, such as saber-rattling, which may not have such simple explanations for their metaphorical use today. 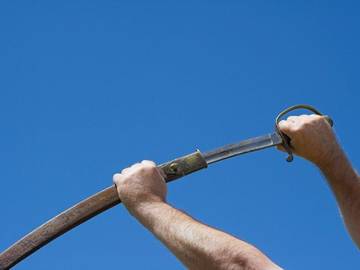 Saber-rattling (also spelled as sabre-rattling outside the US) is defined as “ostentatious display of military power.” It seems safe to assume that this term does come from the rattling of sabers (which tend to either be a type of curved cavalry sword or light dueling swords) in their scabbards, but was this wiggling of one’s weapon before removing it really seen as threatening? There is no unanimity of opinion on why we came to refer to this kind of behavior as saber-rattling. Some think that it comes from the practice of 18th-century Hungarian cavalry units had of brandishing their sabers at opponents prior to charging. Others have said that it comes from the habit that military officers had in the early 20th century of ominously shaking their scabbard when issuing orders to subordinates. Our records indicate that the two words began seeing use in fixed fashion around 1880, making it unlikely that it was directly related to either of the causes given above.

Of late it has been in some quarters impossible to mention the word patriotism without having the taunt of being a sabre-rattling BOBADIL thrown in one’s face.
— The Standard (London, Eng.), 19 Feb. 1879

The “Sabre Rattling” of M. Coumoundouros, especially his assertion that by the coming spring he will have 86,000 men in the field, and that this number of troops will have been got together by the 10th of December.
— The Leeds Mercury (Leeds, Eng.), 3 Nov. 1880

The word appears to have begun in the press in the United Kingdom first, and by the early 20th century had spread to newspapers in the United States.

The peaceful victories of the United States and The Hague and the disposition shown on all hands to fall in with the American suggestions make the sabre rattling which our strenuous and fearsome jingoes occasionally indulge in sound very silly.
— The Boston Herald, 5 Apr. 1907

This is not to say that there may not have been some group, Hungarian or other, so renowned for their penchant for rattling their sabers that they became synonymous with bellicose posturing. If there was, however, they do not appear to have been widely documented in the written records of the 19th century. Well before the words saber and rattling were put together to make a belligerent semantic melange they were often found in close proximity; apparently rattling is simply the noise that sabers are wont to make.

Here the military man shows off his rich uniform; his immense sabre rattling on the side-walk at every step, leads you to think “the conquering hero comes!”
— The Portsmouth Journal of Literature and Politics (Portsmouth, NH), 26 Apr. 1845

The tramp of the footmen, the sound of horses, the rattling of sabers, and all the other deathly, dreadful sounds of an excited imagination, broke upon his ear, until, as a precautionary step, he came to a careful halt preceding the approach of every cross-road, and anxiously gazed around for the sight of blue coats.
— The Pulaski Citizen (Pulaski, TN), 21 Sept. 1866

In case you were wondering, sabers aren't the only bladed weapon that we’ve referred to as rattling in order to convey a metaphorical threat; swords could also be rattled in similar fashion (although this has always been considerably less common than saber-rattling).

Owing to the impossibility of placing even 20,000 troops in the field it seems likely that if the Egyptian crisis requires something more than mere sword rattling the volunteer force will be used for garrison work.
— The Yorkville Enquirer (York, SC), 13 Jul. 1882

And so it was no careless or impulsive “sword rattling” in which the German emperor engaged when he stepping to so spectacularly in Morocco, going to the length of appearing in person to spoil France’s game.
— The Houston Post (Houston, TX), 12 Nov. 1905

As is the case with many of the expressions and words taken from military jargon, saber-rattling appears to be moving further and further afield from its roots. Although it is still most often found used to refer to potentially militaristic action, it may also serve to refer to slightly more peaceable conflicts as well.

A modest amount of legalistic sabre-rattling is probably acceptable in divorce and referendum campaigns. But there have to be practical limits.
— Robert Sheppard, The Globe and Mail (Toronto, Can.), 18 Apr. 1994

This figurative use isn't explicitly defined just yet, but it's certainly making a lot of noise.