Your 'Deadline' Won't Kill You

We all have deadlines in life, and most of us are not happy about them. Some of us deal with this by taking to the Internet and reading articles on diverting things such as word histories. We do this in an effort to feel as though we are actually engaged in something useful, rather than simply procrastinating. If you are reading this because you feel pressured by some deadline that is hanging over your head, you can relax a bit, since no one is going to kill you for missing it. Although that has not always been the case; people did use to be killed for crossing a deadline. 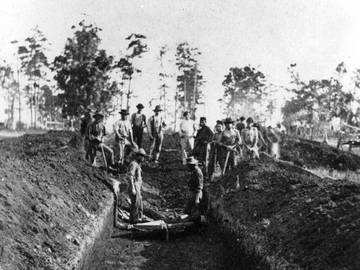 Burial Detail at Andersonville, a Confederate prison for Union soldiers, August 1864. In the 1860s, a 'dead line' was a line within or around a prison. Prisoners would be shot for crossing the 'dead line'.

The sense of deadline that is most commonly found today (“a date or time before which something must be done”) did not begin to see use until the early 20th century.

With the deadline for filings set for tomorrow night, the secretary of state expected a flood of petitions and acceptances tomorrow.
—The Daily Gate City and Constitution-Democrat (Keokuk, IA), 30 Dec. 1919

The word began its life well before this, with our files indicating it was in use from the early 1860s, with the somewhat harsher definition of “a line drawn within or around a prison that a prisoner passes at the risk of being shot.” Some of the earliest mentions of deadline come up in 1863, preserved in diaries kept by captive soldiers during the Civil War.

The guard lines are drawn in; making our play grounds much smaller and cutting us off from our best well of water, this is done for no other purpose under the sun but to interfere with our only enjoyment and to grind us to the lowest depth of subjugation. The the two sutler stores are moved inside the dead-line, all right Mr Lynch we may meet you when we will have "the say" on you. Gutapercha ring making is all the go now by the men and some of them are making really beautiful ones.
—William Williston Heartsill, Diary of William Williston Heartsill (entry Mar. 1863)

Before noon we were turned into the pen which is merely enclosed by a ditch and the dirt taken from the ditch thrown up on the outside, making a sort of breastwork. The ditch serves as a dead line, and no prisoners must go near the ditch.
—Robert Ransom, Diary of Robert Ransom (entry 22 Nov. 1863)

One may find occasional additional uses of deadline in print in 1863 (a letter written to a Tennessee newspaper in July of that year contained the line “we, here in Sasquatchie, feel a little like we had been on the wrong side of the dead line”), but the word was little used. This changed dramatically in 1864.

Early in this year a Confederate prison for captured Union soldiers was established in Andersonville, Georgia, which would remain operational for slightly more than a year. The prison was notorious for poor conditions, harsh punishments, and for, you guessed it, having deadlines. Suddenly the word was being used considerably more often (in news reports, partisan poetry, and commission reports), often in reference to the prison at Andersonville.

Twenty feet inside and parallel to the fence is a light railing, forming the “dead line,” beyond which the projection of a foot or finger is sure to bring the deadly bullet of the sentinel.
—The Sanitary Commission Bulletin, 1 Sept. 1864

No shelter know the sufferers; bolder ones,
Daring to seek it, scorched by the Georgian suns,
Drop on the dead-line ‘neath the warders’ guns.
—The Liberator (Boston, MA), 30 Dec. 1864

In a memorial addressed to President Lincoln in August, 1864, by Union officers confined in Charleston, occurs the following passage with reference to the Andersonville prisoners: “They are fast losing hope and becoming utterly reckless of life. Numbers, crazed by their sufferings, wander about in a state of idiocy. Others deliberately cross the ‘Dead Line’ and are remorselessly shot down.”
Thomas Prentice Kettell, History of the Great Rebellion, 1866

Although this sense of deadline saw some figurative use following the end of the Civil War, by the middle of the 20th century the dominant meaning of the word was well established as a time-related thing, rather than a shoot-a-person-for-crossing-a-line one.

This concludes your exercise in pretending to not waste time while actually avoiding your deadline. Now: get back to work.