Though nearly everyone is familiar with the Roget’s Thesaurus, few people know anything about Peter Mark Roget, the eminent 19th century physician, physiology expert, mathematician, inventor, writer, editor and chess whiz—and what motivated him to write his immortal book. 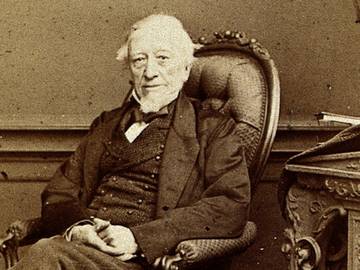 Roget was obsessed with symmetry. The 1852 Thesaurus divvied 1,000 concepts into six Linnaean classifications.

We tend to think of a thesaurus as a collection of synonyms and antonyms. But Roget’s is essentially a reverse dictionary. With a dictionary, the user looks up a word to find its meaning. With Roget’s, the user start with an idea and then keeps flipping through the book until he finds the word that best expresses it. The organization of the book reflects the unique intelligence of the polymath that created it.

Obsessed with words ever since he began studying Latin as a schoolboy, Roget completed a first draft of the Thesaurus (the Latin word for “treasure” or “treasury”) in 1805, when he was just 26. Then working as a physician in Manchester, Roget managed to crank out this string of word lists in less than a year.

However, it was not until his retirement from science in 1848, at the age of 69, that Roget took on the challenge of finishing the Thesaurus. The still spry Roget worked nonstop for nearly four years to prepare the book for publication. He would continue to tinker with his masterpiece until his death at the age of ninety in 1869, having watched over the publication of some 28 editions.

Roget’s Thesaurus of English Words and Phrases Classified and Arranged so to Assist in Literary Composition clearly bore the stamp of its creator. Roget’s was a two-for-one: it put both a book of synonyms and a topic dictionary (a compendium of thematically arranged concepts) under one cover.

The first edition actually contains 1002 concepts, but Roget was a stickler for symmetry. Upon discovering that he had a couple too many, he numbered “Absence of Intellect” 450a and “Indiscrimination” 465a.

The 1000 headings of the 1852 edition were arranged not alphabetically but according to where a given idea fit within Roget’s classification system. In that edition, the first entry is “Existence” (which falls under the first class, Abstract Relations). The purpose is to help readers find le mot juste for a given idea—say “being” or “reality” for existence.

Shortly before publication, Roget decided to insert an alphabetical index as an appendix, thus enabling readers to use the Thesaurus as a convention book of synonyms—without necessarily having to delve into its complex philosophical underpinnings.

Since first rolling off the presses of London’s Longman, Brown, Green and Longmans in June 1852, Roget’s Thesaurus of English Words And Phrases has emerged as one of the most recognizable books in the English language. Roget’s has sold more than 40 million copies, and has become a proprietary eponym like Coke, Kleenex, or Google.

Joshua Kendall is the author of The Man Who Made Lists: Love Death Madness and the Creation of Roget’s Thesaurus (Putnam, 2008). His latest book is First Dads: Parenting and Politics from George Washington to Barack Obama (2016).