Usage commentators have a thing about redundancies. The language is full of them, and they tend to be easy to notice. Some, like "join together" or "free gift" or "old adage," are so entrenched as idioms that they get overlooked more frequently than those that scratch the eardrums, like "the reason is because." 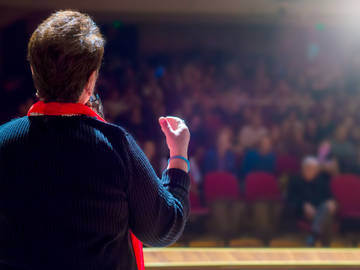 The speech, however long, is what it is.

Because redundancies occur more commonly in speech than in writing, many of the more notable examples come from those individuals who give a lot of speeches as part of their work.

In 2010, First Lady Michelle Obama addressed students at an elementary school in Louisiana (see the transcript here) and said the following:

So I’m excited about it, and I think it’s something that’s very doable. And the thing is, is that if your kids see you doing it — your grandparents, uncles, teachers — they’re going to be engaged. So let’s make this something that we’re all trying to do together.

Notice that Mrs. Obama used the repeated is. She said "and the thing is," then paused, and said the is again.

The repetition of is in a sentence is a phenomenon of which some linguists and usage commentators have taken notice. Many regard the duplication as sloppy and unnecessary, even though it happens more frequently than we might think. At The Chronicle of Higher Education's Lingua Franca blog, Ben Yagoda finds a handful of examples from radio transcripts:

But the truth is, is it’s no longer insurance if the government says they’re always going to bail you out.
Rep. Ron Paul, “Talk of the Nation"

The big difference is, is that right now farmers—and other employees, actually, too—are not required to verify the information.
Georgia Pabst, “Tell Me More.”

It is notable that, just like in Mrs. Obama's use, each of these examples begins with an opening phrase ("the reality is," "the truth is") that seems to place it in relation to something said before, much like a conjunction.

The speaker regards such phrases as having a function of "resetting" the sentence, setting up for a contrasting point that follows. And even though each of these phrases already contains a functioning is, the speaker nonetheless restates the is as a way of putting the sentence back in motion.

There are other instances in which we find redundant is. A common instance repeats the is after a phrase like "what it is." This usage also occurs mostly in spoken English:

What it is is the stepping stone to full retail legalization. This is clearly a way for the marijuana industry to get a foothold in Vermont.
Kevin Sabet, quoted in U. S. News & World Report, 11 May 2017

You are right, this is not just a Trump phenomenon, it is clearly an international phenomenon. And I think that what it is is that the world is changing very, very rapidly.
Bernie Sanders, quoted in Boston Review (podcast), 4 Apr. 2017

But it does see print use as well:

Mostly what it is is a catchphrase. An extremely loud, incredibly annoying, screamingly hilarious (for now) catchphrase.
Liam Mathews, TV Guide, 22 May 2017

Sometimes writers use a comma to separate the first is from the second:

It's not sexist, it's not unjust, it's not arbitrary. What it is, is nobody's business but United's.
Christine Negroni, Forbes, 27 Mar. 2017

These speakers and writers are treating "what it is," "all it is," and similar phrases as nouns that then require their own verb. Look at what happens to Sen. Sanders's quote if we eliminate the second is:

And I think that what it is that the world is changing very, very rapidly.

The sentence makes no sense when it is missing that second is. So what's going on here?

It helps to take a look at what we normally expect from is when we encounter it in a sentence.

The sky is blue.

His brother is in high school.

My neighbor is a painter.

In these very typical uses, the verb is functions as what is called a copula. Related to the word couple and also called a linking verb, a copula does the job of linking the subject to its complement.

So what is that first is doing? You could say that it's also functioning as a copula, but its work is devoted to joining what and it. With that first is committed to that job, you need the second is to join the two parts of the sentence.

And so while the result is not formal English and might make you do a mental double-take, this example of repeated is actually makes grammatical sense.

Interestingly, the most famous use of repeated is wasn't a redundancy at all. When President Bill Clinton uttered the line, "It depends on what the meaning of the word 'is' is," to a grand jury in 1998, the repeated is struck many as a slippery and inane use that bordered on existential meaninglessness.

Rather, Clinton was simply using is in two different ways consecutively. The first is simply refers to the word as a word, a use that would be presented in italics if it had been presented in print (as we do many times in our articles on this site). That is essentially functions as a noun, the object of the preposition of. The second is then follows in its normal function as a copula joining the pronoun what with the noun meaning.