If you're staring down the blue screen of death, pull yourself up by your bootstraps

As any horrified teen whose dad just explained he's going to hook up with his brother for lunch knows, many words and phrases in the English language have changed meaning over time. Occasionally these words will retain vestiges of their former selves, as is the case of secretary, the original meaning of which was “one entrusted with the secrets or confidences of a superior.” In other cases, such as bully, the original meaning appears to have disappeared almost completely (bully formerly meant “sweetheart” or “darling”). 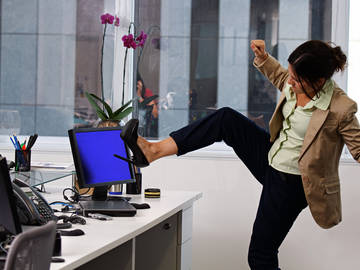 Remember when rebooting your computer, kick with boots, not high heels.

This semantic drift will often take a considerable time to occur, with words gradually shifting over of the course of hundreds of years. In some instances, however, the process is accelerated, and a word will change meaning over a few decades, rather than centuries. Reboot appears to be one of those words in a hurry.

The original meaning of reboot, and the one that is still the most currently used is “to shut down and restart (a computer or program).” In recent years a new sense (“to start (something) anew”) has been blossoming, particularly when used in reference to an existing television series or movie franchise. It still remains to be seen, however, whether the non-computational meanings will replace the one dealing with the muttered curses that accompany restarting your computer.

We see written evidence of reboot used as a verb beginning in the early 1970s, and within a few years, it was also being used as a noun.

A “crash” is an unscheduled system reboot or halt.
—Dennis M. Ritchie and Ken Thompson, The UNIX Time-Sharing System (in Communications of the ACM), Jul. 1974

The rebooting of computers does have an etymological connection to the boots you wear. The connection is not, however, influenced by a desire to wear the sturdiest possible footwear when kicking a machine in need of a reboot.

Reboot appears to have been formed by applying the prefix -re to the sense of boot meaning “to load (a program) into a computer from a disk.” This sense of boot comes from a recent sense of bootstrap, “a computer routine consisting of a few initial instructions by means of which the rest of the instructions are brought into the computer.”

In case the machine is absolutely devoid of correct program data either on the magnetic drum or magnetic tape, the data are read into the computer by means of a bootstrap technique from punched cards or punched tape.
—Walter F Bauer, An Integrated Computation System for the ERA-1103* (in Journal of the ACM), Jul. 1956

The computational sense of bootstrap was possibly influenced by the earlier self-reliant connotations of by one’s own bootstraps, variants of which can be found as far back as the middle of the 19th century (although it should be noted that the meaning of pulling oneself up by one’s own bootstraps has also changed, as in early use it seems to most often refer to “struggling against oneself”):

In this operation it counteracts its own exertions, in a degree, like a man attempting to lift himself by pulling at his own bootstraps….
—John L. Carter, The Ohio Medical and Surgical Journal, 1 Sept. 1852

The earliest meaning of bootstrap is a fairly self-explanatory one (“a looped strap sewed at the side or the rear top of a boot to help in pulling it on”), and has been in our language since the early 18th century. So the next time you read reports of a comic strip or superhero movie undergoing a reboot, you don't need to dwell on all the classic pieces of pop culture tarnished by recent reboot misfires. You can simply think of the lineage of reboot — a gout-afflicted man from 200 years ago, struggling to pull on his boots.