Elope's meaning is shifting towards "a small destination wedding" whereas it used to mean "to runaway and secretly get married," and before that "for a married woman to runaway with a new lover," and even before that it just meant "to escape or runaway" without the romantic context.

Recently, the way people use the words elope and elopement seems to have shifted. To those who consider the most common sense of this word, “to run away secretly with the intention of getting married usually without parental consent,” as sacrosanct as a wedding vow, this can be unsettling. If eloping no longer means “running away from furious and disapproving parents in the dead of night in order to get hitched,” and instead just means “small wedding”—or worse, "small destination wedding"—then we might well ask ourselves, "is nothing sacred?" 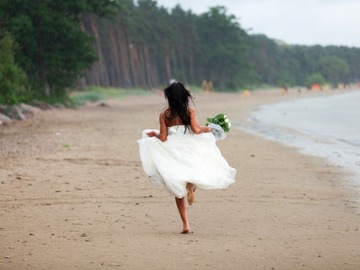 Yes, 'elope' has historically meant "to run away secretly with the intention of getting married usually without parental consent." But it has also meant—and still means—"to escape."

Eloping 101; what you should know about this new wedding trend.
—Laura Rose Davis, charminginlove.com, 21 February 2016

Eloping WITH parents
—Title of a discussion thread on WeddingBee.com, September 2013

So you may have to hire a party rental service to at least provide chairs for those who will want seating during your (albeit brief) elopement ceremony. And with more people at your elopement comes more variables.
—"How Many Wedding Guests?" elopement.co

We at Merriam-Webster cannot tell you whether anything is or is not sacred. We try our best to withhold judgment on that particular question. However, if you would like to ask if elope is being misused in the examples above, we can provide some information.

Elope appears to have become shorthand for "small destination wedding," "wedding that is not financially insane," or "wedding that allows us to not invite all the people we would rather not invite." This certainly differs from the "disapproving parents and sudden questionable decisions" sense of the word, but is it new?

Yes and no. The earliest sense of elope was “escape” or “flee,” and one might argue that this is somehow connected to the way people are now sometimes using it in the context of weddings. Except that this definition does not mean "escape" as in "let’s escape from it all," but rather "let’s grab the keys from the orderly and make a break for it!" The etymology of elope matches this sense, as the word comes from the Anglo-French aloper, meaning “to abduct, run away."

This early sense of elope still has considerable currency, although not in the wedding planning industry. Elope and elopement are often found in settings such as psychiatric institutions where the workers would very much prefer that the inhabitants not leave.

If a patient elopes without telling anyone, document conversations about risks that occurred before the patient left the ED.
—ED Legal Letter, Jan., 2012

The "running away to get married" sense of elope does have another predecessor, at least after a fashion. The word has meant "run away with a romantic interest" since the beginning of the 17th century, but at first it was specifically applied to a woman who left her husband to run away with her lover:

The law does not oblige a husband to maintain an adulteress who has eloped from him, and whose situation has thus become public.
—Sir William Blackstone, Commentaries on the Laws of England, Vol. 1, 1860

So before you get too worried that kids these days use the word like too much and can’t even figure out the right way to run away romantically, relax. Take a deep breath. It's true, the meaning of elope may be as fickle as an inconstant lover’s whim, but that is as it should be. It is part of the ever-changing tapestry of our breathing and living language. Can you accept that?