The noun rapport means “a friendly, harmonious relationship,” especially one “characterized by agreement, mutual understanding, or empathy that makes communication possible or easy.” 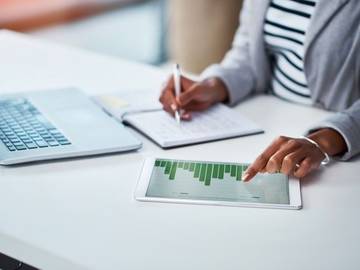 Both 'report' and 'rapport' ultimately derive from the Latin verb 'portare,' meaning “to carry.”

Sometimes the noun is qualified with an adjective or placed in a context that evaluates the harmony of that relationship:

Already the most popular figure, his latest return was marked with a noticeable shift in his rapport with fans. Woods no longer just entertained, he galvanized them, and they returned the favor.
— Joel Beall, GolfDigest.com, 14 Apr. 2019

President Barack Obama kept Mr. el-Sisi at a distance. But it was his second White House invitation from Mr. Trump, who has obviously established a rapport with him. At a meeting in Saudi Arabia in May 2017, the two lavished praise on each other, with Mr. Trump even declaring: “Love your shoes. Boy, those shoes.”
— Mark Landler, The New York Times, 9 Apr. 2019

I was able to break down film with Coach Gattis, and we had a great rapport with each other. He went really in-depth and it was unlike any other meeting I’ve had.
— Miller Moss, quoted in The Detroit News, 12 Apr. 2018 The two men have an easy rapport, and the conversation was unguarded, particularly when Mr. Powell was discussing himself rather than the policies of the central bank.
— Binyamin Applebaum, The New York Times, 10 Jan. 2019

Rapport derives from French; to be en rapport was to be on the same wavelength with another.

“…his grammar may have been imperfect, but still I have understood him; he and I are en rapport; and I say again, Edward, that old Pontifex was not only an able man, but one of the very ablest men I ever knew."
— Samuel Butler, The Way of All Flesh, 1903

Report carries a number of senses as a noun ("common talk," "a usually detailed account or statement," "an explosive noise") and as a verb (too numerous to list).

Rapport retains its French pronunciation in English, unlike report, in which the end –t is pronounced. When the comedian Stephen Colbert hosted The Colbert Report, he encouraged viewers to pronounce the last word in the title like rapport, to match the pronunciation of his French-derived name.

Rapport and report share more than resemblance, however. Both words derive from French verbs meaning “to bring back,” deriving from the Latin verb portare, meaning “to carry.” Rapport carried the original English meaning of “an act or instance of reporting,” a use that dropped out by the end of the 19th century; a report is an account or statement brought back (“read his report from the meeting”).

Are we all on the same wavelength now? Great.