The verbs raise and raze sound the same, but are often opposite in meaning. As a verb, raise refers to bringing something to a higher position or building or moving something upright. To raze something is to tear it down or destroy it to the ground.

The verbs raise and raze are not only homophones, they are also antonyms in some senses. That means that not only can they be easily confused, it can drastically change the meaning of a sentence when they are. 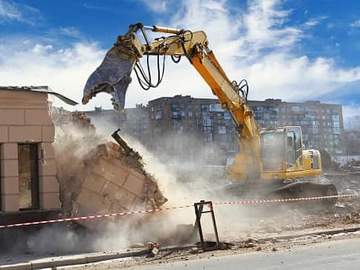 An important distinction when heavy machinery is involved

The Meaning of 'Raise'

There are plans, still in the early stages, to possibly turn [Aretha Franklin's] house into a museum or perhaps raise a statue to her. The Wright Museum will stage an exhibition honoring her next month.
— Steve Friess, The New York Times, 28 Aug. 2018

On Monday a crowd of 15 or so friends and family members watched as the Amish crew expertly raised the barn’s skeleton. By lunchtime, substantial work had been completed on the frame and sills.
— Noah Asimow and Will Sennott, _The Vineyard Gazette _, 14 Oct. 2019

Other senses of raise suggest the elevation of something. To raise a child means to take care of them as they grow up; similarly, one raises crops that are then harvested. You might raise an issue at a meeting, raise a commotion when you are upset, raise someone's spirits with a kind gesture, or raise money for charity.

The Meaning of 'Raze'

Contrast this with raze, which means "to tear down" or "to destroy to the ground":

But supported by some influential scholars and Amazon dwellers, Mr. Bolsonaro argues that the only way to save the jungle is through carbon credits and by financing sustainable economic activities so people can make a living from fish farming, cacao production and other activities that don’t require the razing of trees.
— Paulo Trevisani and Timothy Puko, The Wall Street Journal, 21 Apr. 2021

The square block site historically was at the heart of the city’s downtown shopping district. Frear’s Troy Cash Bazaar was the department store that evolved to anchor the city’s shopping. The building survives as retail and office space. The buildings south of the Frear site were razed in 1969 to make way or what became known first at the Uncle Sam Atrium before evolving into the Troy Atrium.
— Kenneth C. Crowe III, The Times Union (Albany, N.Y.), 19 Apr. 2021

The fact that raze is opposite in meaning to the sense of raise meaning "to build or erect" can lead to serious confusion, since you can both raise a wall and raze a wall, for example. For that reason, it might be important to provide adequate context to indicate which sense you intend—or even, if you are using spoken rather than written English, to spell out the word to make it clear.