It looks impossible to pronounce: pwn.

We're not feeling mean enough to make you guess how to say it, so we'll just come right out and tell you: it's pronounced like it's spelled "pone." As in, take the word own and put a "p" in front and then take out the "o" but pretend it's still there. 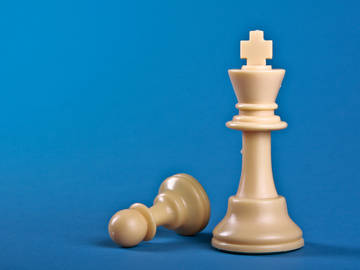 'Pwn' is a lot like the sense of 'own' that means "to have power or mastery over (someone)." It has also been used to describe the act of gaining illegal access to something.

You may have heard your kids saying it when they're playing video games with their friends:

I totally pwned you!

If you play a lot of video games you probably say it yourself. And you may have been saying it for quite some time.

The word has been used in some pockets of the gaming world since the early years of this century, but it's increasingly making appearances in non-gaming contexts, where it typically sidles in with a decidedly informal, slangy tone:

Last week, the Drug Enforcement Administration (DEA) announced it would not change its dismal tune on cannabis, and that weed would remain a Schedule I drug under the Controlled Substances Act (CSA). Then, the Obama administration announced it would ease barriers on marijuana research, despite the Schedule I restriction. Then, a bunch of federal attorneys general got pwned in the Ninth Circuit Court of Appeals regarding their prosecution of medical marijuana businesses, which is a pretty big deal.
—Vince Sliwoski, The Portland Mercury (Portland, Oregon), 24 Aug. 2016

Pwn is a lot like own, then, in the sense of 1b, "to have power or mastery over (someone)." (This is, of course, no coincidence. The word likely has its origin in a mistyping of own, what with the p and o being so close to one another on the QWERTY keyboard and all.)

Like pwn, this sense of own has long covered territory also covered by the verb rout to communicate power or mastery in competition specifically. (That rout word is a busy one; see homograph 5, sense 1c: "to defeat decisively or disastrously.")

Pwn has been branching out of late:

Here it has to do with hacking—that is, gaining illegal access—to something, such as a computer, or, as above, a car.

For all the pwning going on, there's clearly a need for a noun to go with this verb. Enter pwnage. As in:

The only way to avoid a total pwnage of your Android device is to use an antivirus solution or only install reputable, trusted applications.
—Catalin Cimpa, Softpedia (softpedia.com), 19 May 2016

Still no sighting of adjectival use, but we won't be surprised when it shows up.