On 'Prodigy' and 'Progeny'

The apple doesn’t fall far from the tree.

Prodigy and progeny are two words that aren't confused very often, but are similar enough (in both the way they look and the fact that they're often used to refer to children) that they might sometimes warrant a double-take. 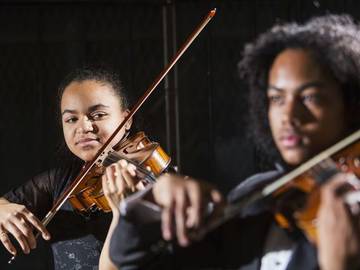 Some progeny end up being prodigies, of course.

Prodigy refers to one who is extraordinarily talented, often in a specified field, such as chess or tennis.

Six years later, the sixth-grader has developed a business, Jonah’s Hands, and a social media following. The young crochet prodigy has about 121,000 followers on Instagram and 20,000 on YouTube, who regularly marvel at Jonah’s colorful and complex art.
— Helen Lee, The Arizona Daily Star, 28 Feb. 2018

Quite often, the context that surrounds prodigy implies that the talented person is very young with the promise of continuing to develop that talent into adulthood. In spite of that connotation, many writers draw attention to the person’s young age by using the two-word term child prodigy.

Before that sense developed, however, prodigy in its earliest use referred to an extraordinary thing interpreted as an omen. That sense is now regarded as archaic, but a related sense meaning “something extraordinary or inexplicable : one that is abnormal or monstrous” survives. That sense connects to the word’s origin, the Latin prodigium, meaning “omen” or “monster.”

A person who watched the interview between the dead and living scrupled not to affirm that at the instant when the clergyman's features were disclosed the corpse had slightly shuddered, rustling the shroud and muslin cap, though the countenance retained the composure of death. A superstitious old woman was the only witness of this prodigy.
— Nathaniel Hawthorne, “The Minister’s Black Veil,” 1832

King: … What say you to't? will you again unknit

This churlish knot of all-abhorred war,

And move in that obedient orb again

Where you did give a fair and natural light;

And be no more an exhaled meteor,

A prodigy of fear, and a portent

Progeny is a word for one’s offspring or descendants, derived from the Latin verb progignere, meaning “to beget” or “to bring forth.” It can be used in scientific writing or, for instance, writing about horse breeding:

Great lawgivers, the founders of beneficent religions, great philosophers and discoverers in science, aid the progress of mankind in a far higher degree by their works than by leaving a numerous progeny.
— Charles Darwin, The Descent of Man, 1871

Though, like offspring, progeny is sometimes used as a humorously “formal” way to refer to one’s children:

I have been known to start singing "Baby Shark" and other Pinkfong recordings spontaneously. The only escape from the company's music is the "Daniel Tiger's Neighborhood" discography, a vast and growing library of Disney titles, or my progeny's latest fixation, the YouTube phenomenon called Mother Goose Club._
— Chris DeVille, The Washington Post, 11 Jan. 2019

Progeny can also refer to the outcome or product of a process, such as “a book that was the progeny of many years of research.”

It’s rare for these words to be confused in edited writing, though you might need to pause for a moment to keep them straight. And if your progeny turn out to be language prodigies, you can always ask them.