Ending a sentence with a preposition (such as with, of, and to) is permissible in the English language. It seems that the idea that this should be avoided originated with writers Joshua Poole and John Dryden, who were trying to align the language with Latin, but there is no reason to suggest ending a sentence with a preposition is wrong. Nonetheless, the idea that it is a rule is still held by many.

When one looks back over the glorious and bloodstained history of grammar and usage wars, it quickly becomes apparent that many of the things which got our ancestors in a swivet no longer bother us very much. George Fox, the founder of the Religious Society of Friends, was so upset that people were using you (instead of thou) to address a single person that in 1660 he wrote an entire book about it. "Is he not a Novice," Fox wrote, "and Unmannerly, and an Ideot, and a Fool, that speaks You to one, which is not to be spoken to a singular, but to many?" The rest of us have pretty much moved on. 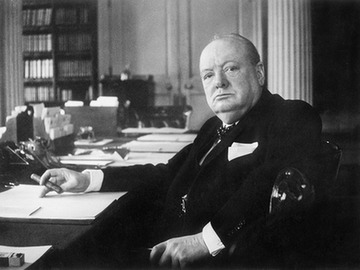 In regard to the rule against ending a sentence with a preposition, Churchill is famous for saying "This is the sort of nonsense up with which I will not put." However, it's unlikely that he ever said such a thing.

And then there are some prohibitions which have a curiously tenacious ability to stick around (such as not beginning a sentence with and), in defiance of common sense, grammar experts, and the way that actual people use the English language. Perhaps the most notable example of such is the rule against ending a sentence with a preposition (also known as preposition stranding, or sentence-terminal prepositions, for those of you who would like to impress/alienate your friends).

Where did this rule come from?

There is some disagreement as to how we came to cluck our tongues at people who finish off their sentences with an of, to, or through, but it is agreed that it’s been bothering people for a very long time. Many people believe that the rule originated with the 17th century poet John Dryden, who in 1672 chastised Ben Jonson: "The preposition in the end of the sentence; a common fault with him.” Jonson probably didn’t take much heed of this admonition, seeing as how he was dead, but untold millions of people have suffered in the subsequent years as a result.

Nuria Yáñez-Bouza has proposed an alternate theory: she discovered that, several decades prior to Dryden, an obscure grammarian named Joshua Poole took a similar position in his book The English Accidence. Poole was more concerned with prepositions being placed in "their naturall order," and did not mention the end of the sentence as specifically as Dryden did.

If we are to be fair we may credit Poole for creating the rule, and Dryden for popularizing it. Both Dryden and Poole were likely motivated by a desire to make English grammar more in line with Latin, a language in which sentences syntactically cannot end in prepositions.

In the 18th century, a number of people who liked telling other people that they were wrong decided Dryden was correct and began advising against the terminal preposition. Sometimes, the advice was to not end a sentence with a preposition. At other times it was more general, as Poole’s rule was. For instance, Noah Webster, in his 1784 book on grammar, took care to advise against separating prepositions "from the words which they govern." He did allow that "grammarians seem to allow of this mode of expression in conversation and familiar writings, but it is generally considered inelegant, and in the grave and sublime styles, is certainly inadmissible."

However, by the time the 20th century rolled around most grammar and usage guides had come to the conclusion that there was really nothing wrong with terminal prepositions. In fact, there has been, for about 100 years now, near unanimity in this regard from usage guides. The matter must therefore be settled, mustn’t it?

No, it must not. A quick look at newspapers from the past year indicates that there are still a number of people who find the terminal preposition an abomination, enough so that they are willing—perhaps, one imagines, even eager—to write letters to the editor of any newspaper in which they find it.

Why do both editorial and letter writers have to flagrantly split the infinitive? And lastly, ending a sentence with a preposition is something we can do without!
— letter to Daily Camera (Boulder, CO), 17 February 2016

I would think a State Columnist would know correct English, unless this was done to get people's attention. It sure got mine. The first sentence of the second paragraph, "Here's where we're at". Really...No sentence should end in a preposition. It should be, "Here's where we are". If it wasn't done on purpose, I would suggest Patrick go back to English Grammar 101 before he writes his next column.
— letter to Asheville (NC) Citizen-Times, 15 February 2016

Conventional wisdom would figure that a Canadian citizen is a Canadian, regardless of status. Plus, you're not supposed to end a sentence with a preposition.
— The Star Phoenix (Saskatoon, Saskatchewan), 25 September 2015

It would appear that some people are determined to hold on to this rule, no matter how many times they are informed that it really isn’t one. In a similar vein, many people who like to use terminal prepositions will give some mangled version of a quote from Winston Churchill, "This is the sort of nonsense up with which I will not put." The linguist Ben Zimmer has conclusively demonstrated that, as is the case with so many Churchill quotes, this was almost certainly never said by him.