You might be familiar with the noun premise as "a statement that is accepted as true for the sake of argument or to serve as the basis for a further thought."

The premise of "Big Holiday" is that Pee-wee, having suffered some unspecified trauma earlier in life, refuses to leave his hometown, where everyone knows and likes him.
— Jonah Weiner, The New York Times Magazine, 10 Feb. 2016 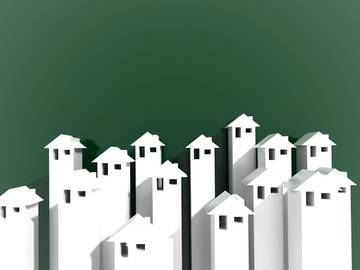 Deriving ultimately from the Latin words for "before" (pre-) and "send" (mittere), premise literally refers to what has been placed before. In some instances, particularly in British English, the word is spelled premiss.

Premise, in its plural form premises, has a sense historically used in contracts and legal documents, referring to "matters previously stated" (as in "as described in the premises"). Modern contracts tend to use an adjective such as aforementioned or foregoing in such instances, but premises is still encountered occasionally. But how did it come to stand for an actual piece of land?

In real estate deeds, the premises are the first part of the contract, where, along with the names of the grantor and grantee, the specifications of the property—encompassing building, lands, and tenements—are described in detail. Since many of the later clauses of the contract need to refer to the first part and its descriptions, the word premises came to identify with the property described. (Voila! Lawyers do it again.) For that reason, it tends to be used to refer to real property:

"Then," said Sir George Staunton, "I am the first to inform you there has been an invasion of your quiet premises since you left home."
— Walter Scott, The Heart of Midlothian, 1818

According to the article, Animal Control determined the dogs were in harm and removed them from the premises.
— Zach Harper, CBSSports.com, 12 Nov. 2013

This sense is construed as plural and takes a plural verb:

And ten minutes later, the premises of Rid-a-Spook were deserted ... and as silent as the grave.
— Eva Ibbotson, Dial-A-Ghost, 1996

Many animal welfare advocates don’t like breeders of any kind, while others accept responsible buying practices. HSUS states that in some cases, buying from a breeder is acceptable, but only if the premises are open for visiting and the buyer can also meet the parents of the prospective pet.
— Kristin Hugo, Newsweek, 19 Sept. 2017

Now that we've established this, we hope you never have cause to be removed from any premises in the future.