Can there be "precedented" times?

We often remark upon unfamiliar times and experiences not backed by previous precedent as unprecedented times. On the contrary, we rarely hear of precedented times, perhaps because periods of time that are familiar or reminiscent of earlier times are rarely notable.

Each period of English speakers seem to have collectively decided that certain words just go well together; unforeseen is often accompanied by circumstances, waters is rarely found without uncharted as a modifier, and times seems to, at least recently, always be unprecedented. This state of affairs has prompted more than one person of late to wonder why don’t have some precedented times for a change. 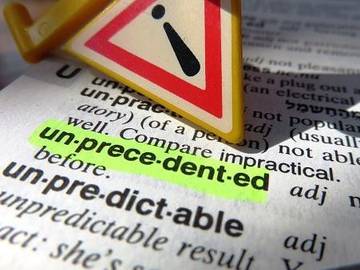 The combination 'unprecedented times' can be found as early as 1795.

This is a reasonable enough question; we rarely, if ever, refer to times as precedented. This does not meant that precedented is not a word; it is an uncommon one (“supported or justified by a precedent”) but can be found. In its initial use, in the beginning of the 17th century, the word was spelled presidented.

For among all those guiftes of Grace, and Nature, (which are in your Maiestie for varietie manifold, and for their worth very singuler) none yet for applause generally may seeme rightly superiorating that of Bountie, and Clemencie, noted of all in your Grace more eminent, as remarkable for manie presidented particulers.
— The miscellanie, 1615

It is agreed that no Command be imposed upon this County, but such as are legall and presidented in good times.
— Reasons why Sir Iohn Hotham, trusted by the Parliament, cannot in honour agree to the Treaty of pacification, 1642

Shortly after, by the middle of the century, precedented begins to replace presidented, and the word often appears as the past participle form of the transitive verb precedent (“to furnish with or support or justify by a precedent”).

Notwithstanding the strange and unexpected delayes (which can be precedented by no former times) to His Majesties two former Messages, His Majesty will lay aside all Expostulations, as rather serving to loose time, then to contribute any remedy to the evills, which (for the present) doe afflict this distracted Kingdome.
— A collection of His Maiesties most gracious messages for peace, 1645

The latter being rendred so much the more excusable, because, not only precedented by the former, but created and continued to prevent such mischiefs, as your implacable Spirits doe foment in the hearts of ignorant and abused people.
— Francis Osborne, A persvvasive to a mutuall compliance under the present government, 1652

We therefore out of our Zeal to your Majesty and your Posterity, with more alacrity, and colerity, than ever was precedented in Parliament; did address our selves to the Service commended unto Us.
— Arthur Wilson, The history of Great Britain, 1653

Unprecedented comes into use not long after.

…and yet at Last, proceeded to an unpresidented Extremity: Root and Branch: (nothing less would satisfie them:— King, Bishops; all went down.)
— Roger L’Estrange, The relaps’d apostate, 1641

It took a bit longer for unprecedented times to show up, but once this combination arrived it stuck, and has been in consistent use since 1795.

I am proud of your approbation of my Answer to my Catholic fellow-citizens of Dublin; and must beg of you to permit me to adopt it now as the best explanation of my sentiments in these awful and unprecedented times.
— Courier (London, Eng.), 14 Apr. 1795

These are times unprecedented, and therefore if it be true that there is no precedent of a minister’s declaring war, and concluding a peace, we think that one ought, and could with that it might, be made now for the first time.
— Clergymen of the Church of England, A letter to the Right Hon. William Pitt, 1797

So those people who yearn to have some precedented times are in luck. We’ve been calling our times unprecedented for at least 225 years now, and have furnished ourselves with well over two centuries of lexical precedent.