Notes on a marsupial with various names

Both possum and opossum correctly refer to the Virginia opossum frequently seen in North America. In common use, possum is the usual term; in technical or scientific contexts opossum is preferred. Opossum can be pronounced with its first syllable either voiced play or silent play . 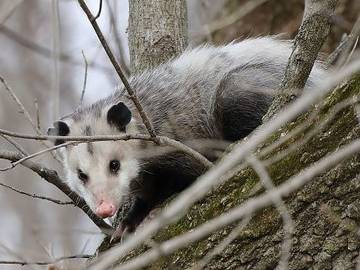 So cute. So many teeth.

Ranging from southern Canada all the way to northern Costa Rica, the Virginia opossum (Didelphis virginiana, if we want to get technical) is the only marsupial found north of Mexico. Most English speakers who encounter the creature drop the Virginia and refer to it simply as an opossum. Except that's not quite right, because most of us call it a possum. Hmm.

Both possum and opossum date to the early 17th century, though current evidence of opossum dates all way back to 1610, as opposed to the upstart possum, which current evidence dates only to, um, 1613. The word existed in (at least) two earlier forms—apossoun and opassom—and is from a Virginia Algonquian word the exact form of which is now unknown, but that itself comes from the Algonquian *wa·p-, meaning "white," and *-aʔθemw-, meaning "dog, small animal." (A note about those asterisks: they mean that the words are assumed to have existed or have been reconstructed by means of comparative evidence. This etymology business is no joke.)

The earlier forms, apossoun and opassom, eventually settled into opossum and, in a process known as aphesis—which is the loss of a short unaccented vowel at the beginning of a word—the variation possum. (Aphesis also gave us lone from alone.)

Textbooks, encyclopedias, and science publications favor opossum, but when it comes to general speech and writing, possum is and has been the far more common choice. (And it's always the choice in the idiom play possum, which means "to pretend to be asleep or dead." It comes from a trick the Virginia opossum does: when it's caught it goes catatonic. Cool!)

But there's more to this story. So far, we've only addressed the fact that the Virginia opossum, a marsupial that makes its home in large swaths of North America, is referred to with both possum and opossum. But there's another group of marsupials out there in the world that is also referred to with both terms. Yes, the chiefly arboreal marsupial mammals of Australia and New Guinea are referred to by those who live there as possums, or sometimes opossums. In this case, getting technical about things can help: the term phalanger accurately refers to these creature of Australia, Tasmania, New Guinea, and islands west to Celebes and east to the Solomons.

The fact of there being these other Australasian marsupials (which got the name because they resemble the Virginia opossum) means that there are some people who assert that the two terms are only properly applied as distinguishing terms: they will tell you that the Australasian marsupials are only properly called "possums," and that the creature in your American backyard is only properly called an "opossum." (Note that there are other American marsupials, other than the Virginia opossum but also of the Didelphidae family, and they too are called both possums and opossums, with the latter being the prescribed name.)

How to Pronounce 'Opossum'

What does all this mean for you? Well, if you are looking for guidance on what to call the cute little tick-eating North American marsupial with the opposable thumbs on its hind feet you can choose either opossum or possum (or opossum pronounced like possum is), and you should know that possum is far more common but that opossum is what the science-types prefer. Also know that possum and opossum can both refer to some Australasian marsupials that can also be properly called phalangers.