A History of ‘Plague’: Illness as Metaphor

A word with extended use throughout its existence

Until recently, the idea of plague has felt, for many of us, like a notion belonging to history. Plagues, like wars, are signposts on the historical record. Authors as diverse as Boccaccio, Daniel Defoe, Albert Camus, and Gabriel Garcia Marquez have set works of great literature during times of plague. In Camus’s case, the plague was intended as an allegory for fascism—a metaphor for something that creeps into a place and takes over before most people notice, only later causing subtle shifts in human behavior. Nowadays, when we are confronted with a rapid uprising of disease—as we are with COVID-19—we are more likely to see it referred to by a more clinical word like epidemic or pandemic than we are a literary one like plague. 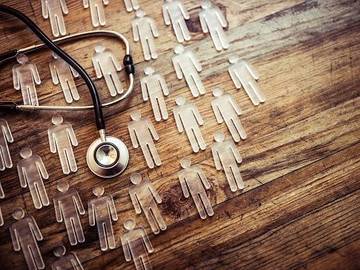 'Plague' derives via the Middle English 'plage,' from the Latin 'plaga,' meaning “blow.”

Plague is a term that has not been used lightly. Historians tend to apply the term to a specific plague: the Bubonic Plague, also known as the Black Death, responsible for the eradication of anywhere from 30 to 60 percent of the European population in the 14th century. (It even has a page on the CDC website.)

The adjective bubonic comes from the buboes (inflammatory swellings of lymph glands in the groin and other areas) formed as a characteristic symptom of this disease, which occurs when one is infected with the bacterium Yersinia pestis. But the Bubonic Plague wasn’t the only manifestation of the plague: the disease presented itself in other forms, including pneumonia (inflammation of the lungs), and septicemia (blood poisoning).

Daniel Defoe’s A Journal of a Plague Year, written in 1722, is set in 1665, when the Bubonic Plague resurfaced in London. Two years before Defoe published the book, an outbreak of the disease had turned up in Marseilles, and Defoe wanted to provide readers an idea of what to expect as it spread over the continent. (A lot of it had to be researched, as Defoe was only five years old in 1665.)

From the beginning of April especially they stood at twenty-five each week, till the week from the 18th to the 25th, when there was buried in St Giles's parish thirty, whereof two of the plague and eight of the spotted-fever, which was looked upon as the same thing; likewise the number that died of the spotted-fever in the whole increased, being eight the week before, and twelve the week above-named.
— Daniel Defoe, A Journal of a Plague Year, 1722

Much like the plague that afflicts the Algerian town of Oran in Albert Camus’s novel La peste (The Plague, 1947), the Bubonic Plague was spread chiefly by rats. Rats are considered pests, and pest is indeed a word we once used for plague.

Etymologically speaking, plague has never been confined to disease but has consistently been applied to calamity. It derives via the Middle English plage from the Latin plaga, meaning “blow.” It first appeared in English in the 14th century; the OED defines its earliest sense as “A blow; (also) smiting, slaughter.” Though this sense is now obsolete, there would continue to be references in literature likening plague to something that afflicts another by striking:

It was noticed with an ungenerous bitterness of feeling that the four gentlemen--the Virginian, the British officer, the young clergyman and the governor's secretary--who had been her most devoted attendants on the evening of the ball were the foremost on whom the plague-stroke fell. But the disease, pursuing its onward progress, soon ceased to be exclusively a prerogative of aristocracy.
— Nathaniel Hawthorne, "Lady Eleanore's Mantle,” 1838

The word plague has found itself attached to the general idea of affliction for nearly the entirety of its existence. The Ten Plagues of Egypt, inflicted by the God of Israel in the Book of Exodus in retaliation for the Pharaoh refusing to release the Israelites from slavery, are varieties of contamination not limited to disease: blood in the Nile River; frogs; lice; flies; the killing of livestock; festering boils; hail; locusts; darkness; and the death of firstborn sons.

William Shakespeare-who, as an infant, lost his two older siblings to plague-used the word plague in at least 25 different plays, but the plague itself rarely comes up as a matter of plot. Not a single character dies of the plague. Instead, Shakespeare preferred to use the notion of plague as a metaphor. The most famous use might be Mercutio’s line in Romeo and Juliet, which he repeats a few times in the moments before dying.

Mercutio. Ask for me to-morrow, and you shall find me a grave man. I am peppered, I warrant, for this world. A plague o' both your houses! Zounds, a dog, a rat, a mouse, a cat, to scratch a man to death! a braggart, a rogue, a villain, that fights by the book of arithmetic!
— William Shakespeare, Romeo and Juliet

This line is sometimes spoken as “A pox on both your houses,” suggesting the interpretation of more specific biological infection. In many uses, however, plague works as a general expression of a curse, with some making more explicit allusion to Biblical plague:

IAGO. Call up her father, Rouse him, make after him, poison his delight, Proclaim him in the streets, incense her kinsmen, And, though he in a fertile climate dwell, Plague him with flies. Though that his joy be joy, Yet throw such changes of vexation on't As it may lose some color.
— William Shakespeare, Othello

QUEEN MARGARET. And leave out thee? Stay, dog, for thou shalt hear me. If heaven have any grievous plague in store Exceeding those that I can wish upon thee, O, let them keep it till thy sins be ripe, And then hurl down their indignation On thee, the troubler of the poor world's peace!
— William Shakespeare, Richard III

The word lasted through the centuries as a general term of polite invective:

…and that when he said he had his business to attend to, she replied: "Oh, a plague on your business! I am sick of that word--one hears of nothing else in America. There are ways of getting on without business, if you would only take them!"
— Henry James, The Bostonians, 1886

'"Master Harry Dawe?" said he. '"The same," I says. "Where a plague has Bob Brygandyne gone?" 'His thin eyebrows surged up a piece and come down again in a stiff bar. "He went to the King," he says.
— Rudyard Kipling, Rewards and Fairies, 1910

It came to pass that plague would fit into expressions describing any kind of general annoyance:

Meg smiled and relented, and whispered as they stood waiting to catch the time, "Take care my skirt doesn't trip you up. It's the plague of my life and I was a goose to wear it."
— Louisa May Alcott, Little Women, 1869

The swarming pestilences of Exodus would inform use of plague to refer to similar creatures massing in large amounts, or other kinds of blinding pollutions:

Who does not remember his flaming red revolutionary pamphlets? Their sudden swarmings used to overwhelm the powers of every Continental police like a plague of crimson gadflies.
— Joseph Conrad, A Set of Six, 1908

Mr. Janson stated at the Entomological Society that the females of the bark feeding Tomicus villosus are so common as to be a plague, whilst the males are so rare as to be hardly known.
— Charles Darwin, The Descent of Man, 1871

On every side, and far as the eye could see into the heavy distance, tall chimneys, crowding on each other, and presenting that endless repetition of the same dull, ugly form, which is the horror of oppressive dreams, poured out their plague of smoke, obscured the light, and made foul the melancholy air.
— Charles Dickens, The Old Curiosity Shop, 1841

Uses such as these led naturally to the figurative extension of a plague being something that occurs in a multitude, leaving a negative result (“a plague of errors”), fitting alongside similar nouns for a quantity of occurrences likened to a breakout of disease (“a spate of burglaries,” “a rash of complaints”).

The idiom avoid (something) like the plague finds its earliest use in the 17th century, likely with the London plague of Defoe’s plague year still in English speakers’ memories. The simile found its way into literature in various forms:

“You were making straight for the shrubbery, when you saw me—I am certain, sir, you saw me—and you turned away as if I had got the plague, and went into the house.”
— Wilkie Collins, The Moonstone, 1868

“I like Thornfield, its antiquity, its retirement, its old crow-trees and thorn-trees, its grey facade, and lines of dark windows reflecting that metal welkin: and yet how long have I abhorred the very thought of it, shunned it like a great plague-house?”
— Charlotte Brontë, Jane Eyre, 1847

…the crowd gave way before her, and seemed to fear the touch of her garment, as if it carried the plague among its gorgeous folds.
— Nathaniel Hawthorne, The Scarlet Letter, 1850

As we now we find ourselves coping with a very real scourge, the word plague might see a return in use from the metaphorical to the actual, even as epidemic and pandemic remain the preferred labels.

MORE TO EXPLORE: 'Pandemic' vs. 'Epidemic': How They Overlap, How They Differ