Peek is sight-related and often refers to looking quickly or through a small space. A homophone, peak is a noun or verb that refers to a maximum or high point figuratively or literally, as in the peak of a mountain or "peak performance." Lastly, a third homophone pique, means "to excite or arouse" and is usually used with "curiosity."

Peek, peak, and pique: they sound the same but mean very different things. 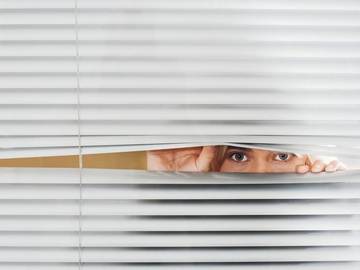 The first one we learn is peek: it has to do with looking, especially furtively or quickly or through a small space.

Open the box and peek inside.

It's the word in peekaboo, a game for amusing babies that we've been calling by that name for more than four centuries. (That word, unsurprisingly, comes from peek and the boo of both contempt and fright.) Meanwhile peek itself has been a verb since the 14th century. (The noun peek, as in "take a peek," is a 17th century development.)

Peek is also, somewhat unhelpfully, the word in the phrase sneak peek. We say "unhelpfully" because the "ea" in the first might make it hard to remember the "ee" in the second. Our advice to you: keep in mind that you peek in order to see.

Peak is the verb you use to talk about reaching a maximum, or coming to a highest point, literally or figuratively:

The meteor shower will last for several days but will peak on Sunday.

Its noun counterpart (referring to various pointed or projecting parts) is older and more common. And just as every mountain has a peak, thinking of the peak—the highest point—is the way to remember that peak is the verb for reaching the highest levels. Associating the "a" in peak with the "a" in maximum or with a capital "A" (the most mountain-like of letters) can be helpful.

Pique is the oddball of this trio. We know the "ique" spelling from the likes of technique, antique, and unique, but pique nonetheless looks a little exotic. It comes from a French word meaning literally "to prick," and when people were first piqued in English they were irritated and angry. Pique can still be used (especially in British English) to mean "to arouse anger or resentment in," as in "Their rudeness piqued me." Now, however, it's most often our interest or curiosity that gets piqued—that is to say, our interest or curiosity is aroused:

The large key hanging on the wall piqued my curiosity.

Pique has another meaning too, though it's less common than either of those already mentioned. Pique sometimes is used to mean "to take pride in (oneself)," as in "She piques herself on her editing skills."

Master this trio, and you can pique yourself on your word skills.