Workin’ to pay the bills. 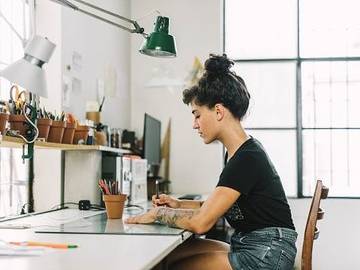 The term first saw use in print in the late 1990s.

As the gig economy continues to proliferate, and companies seek more and more ways to cut operational costs, many workers find themselves working on a permalance basis.

Permalance is a portmanteau formed by the combination of the adjective permanent with freelance, which began as a noun but can also be an adjective (a freelance editor) or a verb (freelance for a number of magazines). The first part of permanent is already found in a number of other portmanteaus, including permafrost and permaculture.

Permalance has come to be the term used by employers and workers to describe a working arrangement that keeps one tied to regular work without the benefits and other arrangements typically associated with full-time regular employment.

The term saw its first use in print in the late 1990s, emerging from the parochial dark room of office jargon:

Separately, Trone has struck a deal with art director John Roberts and copywriter Jonathan Kaler, in what the company terms a "permalance" agreement. "It's a word we use because they give us about half a week on a permanent basis," said Trone creative director Stephen Feinberg. "They're based in Charlotte [N.C.], come up once a week in person, then communicate by e-mail and telephone . . . Pretty much anything we touch, they'll work on to make our creative deeper."
— T. W. Siebert, Adweek, 15 Nov. 1999

While freelancers are usually able to offer their skills to more than one employer at a time, permalance has come to be preferred to describe the increasingly common arrangement in which a worker is contracted to provide their labor exclusively to a single employer. As the arrangement has become more accepted, the term has seen more use:

Octogenarian Brit auteur Ken Loach continues his career-long proselytism on behalf of the common folk with Sorry We Missed You, a rousing if at times melodramatic damnation of the gig economy. No matter how hard his blue-collar protagonists struggle to better their lives, the no-exit design of a permalance workforce means nothing but eventual oblivion.
— Stephen Garrett, The Observer, 22 May 2019

Many recent changes in the nature of work are cause for concern, like the technological destruction of true off hours and the rise of permalancing corresponding with the fall of jobs with benefits and pensions.
— Rochelle Hampton, Slate, 29 Aug. 2018

Our relationship to employment has also become more tenuous with the growth of contract, freelance and permalance working arrangements and the necessity of knitting together multiple gigs in order to make ends meet. If you pay your bills by renting out your apartment two weeks a month on AirBnB, drive for Uber and do odd jobs via TaskRabbit, what sort of job title do you give yourself and how do you represent your gig dependent life on a business card?
— J. Maureen Henderson, Forbes.com, 22 Aug. 2014

Through freelance and permalance jobs are often considered thankless, the terms come with a history that touches upon nobility. In the Middle Ages, a free lance was a mercenary soldier or a knight available or hire. (Another term, derived from Italian, is condottiere.) The lance in free lance, of course, referred to the knight’s preferred weapon. When the noun appeared in English in the early 19th century, of course, real medieval knights were a thing of the past, but the term became a staple of then-popular historical fiction.

``I?---I offered Richard the service of my Free Lances, and he refused them---I will lead them to Hull, seize on shipping, and embark for Flanders; thanks to the bustling times, a man of action will always find employment. And thou, Waldemar, wilt thou take lance and shield, and lay down thy policies, and wend along with me, and share the fate which God sends us?''
— Walter Scott, Ivanhoe, 1819

So as it turns out, knights were once part of the gig economy. We don’t know if the position included dental.