The verbal phrases pawn off and palm off are defined synonymously, and from their beginnings, they have been steeped in deception—pawn off slightly less so. That phrase has the basic definitions of "to get rid of" and "to pass off" (with or without deception), which hint at the pawning of an item for a loan. Palm off, on the other hand, specifically refers to getting rid of something underhandedly as well as to sneakily passing off a thing or person as something or someone they are not. The phrase signals "deception," whereas pawn off has a "business" sense. And it is from these nuances in meaning that we can begin to differentiate the usage of the two. 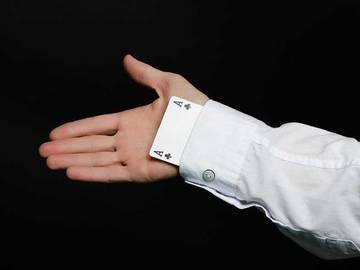 All of our usage advice is aboveboard.

English speakers began exchanging pawn as a noun for "pledge" or "security" in the 15th century. The word is from the Middle French dialectal pan, of the same meaning. (The chess pawn is of different origin; it derives from Latin pedo, meaning "foot soldier.") Pawn's currency as a verb was coined in the 16th century in senses referring to giving or depositing something as a pledge or security (especially in exchange for money), as in "She had to pawn her diamond ring to pay rent."

During the mid-1700s, pawn began its partnership with the adverbs off and upon and, in turn, increased its value in the English language as part of a verbal phrase denoting acts of getting rid of or passing off. Its implication of deception also increased: "The guy tried to pawn off the cubic zirconia ring as a diamond," "She pawned off the counterfeit bills at the store." The collocation pawn off is the more frequently used nowadays and can mean either "to sell (something) for more than it is worth by being dishonest" or "to get someone to accept or do (something)."

Hapless individuals and business owners can find themselves stuck with useless fakes pawned off as the real thing for which they paid tens of thousands of dollars.
— Christopher Null, PC World, 24 Sept. 2013

A girl Parnell was chatting with abruptly excused herself … and pawned him off on her friend Lina, a pretty Columbian girl whom Parnell eventually married.
— Mark Konkol, The Chicago Sun-Times, 26 Dec. 2010

During the 17th century, the verb palm begins being read and heard (palmistry—a word for "palm reading"—traces to the 15th century) especially in reference to cheats in card games and tricks in which a person "palms" ("conceals") a card in the palm of the hand. A person might also palm something other than a playing card and pass it on inconspicuously.

I was shocked when Williams spoke up, and not on my behalf. "He's right—you should go," he said. I shot him an accusatory look but he stood and stretched out his hand. I reluctantly reached out to shake it and then realized that he was palming me a quickly drawn map on a tiny post-it. It said, "7 p.m."
— Kim Masters, Hollywood Reporter, 19 Aug. 2019

The noun palm referring to the concave part of the hand traces to the 14th century. It is recorded in Middle English as paume and palme, which ultimately derive, via Anglo-French, from Latin palma, meaning "palm of the hand" or "palm tree" (from the resemblance of the tree's leaves to an outstretched hand). The "tricky" noun (as in "the cardsharp's skillful palm") begins being passed around by the mid-1600s. About the same time, the verb is used, by way of extended metaphor, in the senses "to dispose of usually by trickery or guile" and "to give a false identity or character to." In such constructions, it is usually followed by off.

Grandparents over 70 who regularly look after their grandchildren have a 37% lower mortality rate than people the same age who don't help out. You're more than a third less likely to die if you look after youngsters than if you don't—that's pretty substantial. … So you're not asking too much of your parents when you palm the little ones off ... on a Sunday afternoon. You're actually decreasing their chances of dying.
— Mike Rampton, Huffington Post, 2 May 2019

His contemporary Edgar Allan Poe said that Herbert had "written more trash than any man living," and he wasn't above repackaging his old works and palming them off on a publisher as new.
— Jim Merritt, Field & Stream, December 1996

He finally settled in Lorain, Ohio, in 1931, palming himself off as a minister, and inspiring awe with the way he spoke English.
— Toni Morrison, The Bluest Eye, 1970

Which Phrase to Choose

The shared meanings of pawn off and palm off may have come about from the mishearing of the earlier palm off as pawn off (which would make pawn off an eggcorn)—or they may have evolved independently from the meanings of their base words. We won't palm/pawn off either theory on you as fact. But we will say that when you pawn an item, it commonly means you pass it off to someone else often in exchange for money, and when you palm something, it means you hide it in the palm of your hand in trickery or furtiveness. A case could be made that palm off, considering its history, often implies a higher degree of deceit than pawn off, so take that into consideration when it comes to your various dealings, whether furtive or otherwise.