'Muster' or 'Mustard': Which Gets a Pass?

One gets cut. The other gets passed. 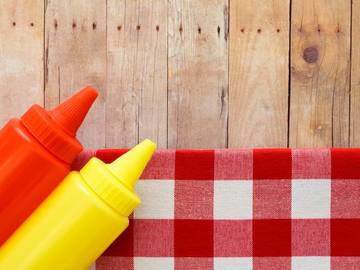 If someone passes the mustard, remember to say "Thanks."

The good news is that the appropriate choice of words to precede muster and mustard is very clear. One passes muster and cuts the mustard. Of the possible misapplications of these phrases, it is more common to encounter pass the mustard (although as with many wordplay jokes, it is not entirely clear whether a mistake or a pun has been made).

Just a few more cracks at the old typewriter and I’ll really begin to have something that will pass mustard.
— George Allan England, Keep Off the Grass, 1919

Rye bread could not be construed into being of a crackerish nature and couldn’t pass mustard, so to speak.
— The Atlanta Constitution, (Atlanta, GA), 17 Mar. 1899

Pass muster is considerably older than cut the mustard, and has been in use since the late 16th century. In earliest uses it typically was written as pass the muster; the muster being referred to here was defined as “formal military inspection.”

In these two verses there seemeth no difference at all, since the one hath the very selfe same woordes that the o|ther hath, and yet the latter verse is neyther true nor pleasant, & the first verse may passe the musters.
— George Gascoigne, The Poesies of George Gascoigne, 1575

A goodly troupe of armed men, did passe the Muster thoe,
Whiche was to freend as glad a sight, as fearfull to the foe.
— Thomas Churchyard, A Pleasaunte Laborinth, 1580

Soon enough pass the muster started to drop its the, and pass muster began to be used in general and non-military senses, with the meaning it has today: “to gain approval or acceptance.” This sort of potted history of a word or phrase is very satisfying, since it is not immediately apparent to many people why we use these words together as we do, yet the explanation is very clear and sensible. This does not appear to be the case with cut the mustard.

There have been a number of origin stories offered for cut the mustard. A small sample of these would include it being a variant of passing muster, cut having the meaning of “successfully engage in an endeavor” and mustard being slang for “something excellent,” a reference to mustard powder needing to be cut (adulterated) with water before eating it, and a large number of other increasingly improbable possibilities.

Here is what we know about the phrase: we define it as “to achieve the standard of performance necessary for success,” it appears to have originated in the United States, and the earliest record of its use is from the early 1890s.

It cometh to pass on the third day that Joseph Walsh, Dadlets Clark and Edwin Elteljorg of the Omaha base ball club failed to “cut the mustard” with the Louisvillle American aggregation and now most emphatically state that they were “just talking,” and never intended jumping the Western.
— Omaha World-Herald (Omaha, NE), 9 Jun. 1891

Minneapolis worked hard to win the game but the Millers could not cut the mustard notwithstanding herculean efforts.
— Omaha World-Herald (Omaha, NE), 23 Jun. 1891

We truly relished the opportunity to clear this up for you.