The Origins of Parasites

Take a guess: which literary quotation shows the original use of the word parasite?

… Gerty had always been a parasite in the moral order, living on the crumbs of other tables, and content to look through the window at the banquet spread for her friends.
— Edith Wharton, House of Mirth, 1905

Man is infested with internal parasites, sometimes causing fatal effects; and is plagued by external parasites, all of which belong to the same genera or families as those infesting other mammals, and in the case of scabies to the same species. — Charles Darwin, The Descent of Man, 1871 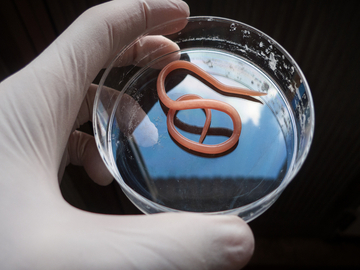 A parasite is "an animal or plant that lives in or on another animal or plant and gets food or protection from it." But it's also "a person who exploits the hospitality of the rich and earns welcome by flattery"—and that meaning came first.

Although the Darwin quote is older and stolidly scientific, that meaning of parasite is in fact the newer one—by about 200 years.

Yep: the original meaning of parasite is "a person who exploits the hospitality of the rich and earns welcome by flattery." Our earliest evidence of that use is from 1539. Evidence of the meaning referring to an organism that lives in, with, or on another organism dates to 1728.

Although the biological meaning of parasite is the one we're most likely to encounter today, the original parasite was considerably larger. Human-sized, in fact.

The word has its origins in the Latin word parasitus, that word being from Greek parasitos, from para- and sitos, meaning "grain, food."

The human parasite must have been a somewhat familiar figure in ancient times, because it became a stock character in Greek and Roman comedy. The comedic Parasite endears himself to a patron by various means—by being a generally entertaining fellow, by assisting in matters relating to the affairs of the heart, by heaping on the compliments—in exchange for food.

In one sense as in the other, the parasite, continually famished, gets more than it gives.

MORE TO EXPLORE: The Difference Between 'Bug,' 'Insect,' and 'Beetle'