There are many words for student or follower in English. Most carry the connotation of youth, and some have distinctly academic uses, like pupil, while others are more often used during the period of learning or starting a job, like apprentice or trainee. Intern is used for a pre-professional position, while a more philosophical connection between teacher and learner is evoked with acolyte, a word originally used for an assistant to clergy during church services. A very promising student who might get special attention would be a protégé, from the French word meaning “protected.” Perhaps the most recent of such words is mentee, a back-formation from mentor that dates to the mid-20th century. 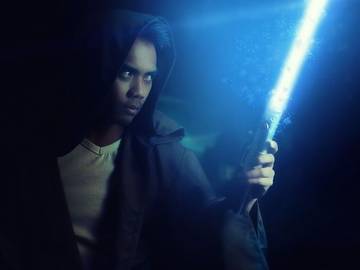 Most recent, that is, except for one. Padawan is a word that is being used more and more in a generic way to refer to learners, followers, or anyone just starting out. It was used in Star Wars: Episode I, the first of the prequels made by George Lucas and released in 1999, and refers to aspiring Jedi knights whose education is overseen by a Jedi master. This master-student relationship is a major part of the plot of the films; in the first films of the series (that is, episodes IV-VI) Obi-Wan Kenobi is shown instructing Luke Skywalker, who is later taught by Yoda.

In Episode I, padawan is used to refer to a younger Obi-Wan Kenobi as he learns a very particular set of skills (the ways of the Force) from Qui-Gon Jinn. In a move that underscores many of the differences between the first trilogy and the prequels, Lucas chose to invent terminology for the newer film whereas he had made a clear effort to use plain language in the originals. When Darth Vader, who had been Kenobi’s apprentice, confronts his former teacher in the famous lightsaber duel in Star Wars (also called Episode IV or A New Hope; it's complicated), he says:

When I left you, I was but the learner. Now I am the master.

A more basic word than learner in this context doesn’t exist. Even with the pseudo-religious overtones of the Force, Lucas initially chose not to use words like apprentice or acolyte. Padawan became his neologism in the prequels, adding a layer of exotic specificity that some feel also created more emotional distance with viewers (or so we've heard). After Kenobi advances from padawan to Jedi knight, Yoda uses the word to refer to Anakin Skywalker (the future Darth Vader) as the student of Kenobi. Perhaps Lucas felt that lexical balance was restored by also using the archaic word youngling to refer to these younger Jedi initiates.

Just as we see Jedi being used in a generic way today, padawan is beginning to be found in contexts far removed from galaxies far, far away. (Indeed, Padawan is the name of a municipality in Malaysia, though it’s not known how Lucas chose the name.) It usually refers to a younger follower or student of some kind, and usually in fields that require special ability or skill. In sports, for example, we find examples from both professional baseball and football:

Those two worked a lot together during spring training, and they work well together. There is definitely a master/padawan combo there.
— Cherokee Tribune, Canton, Georgia, 23 October 2017

The other perceived top suitor for Romo, Denver, possesses a pair of perhaps promising Padawan passers in Trevor Siemian (entering Year 3) and Paxton Lynch (entering Year 2). But GM John Elway has a talent-packed roster only one year removed from a Super Bowl championship. It would be a top contender again in 2017 if it can immediately get elite QB play.
— John Kryk, Edmonton Sun, 23 March 2017

We see it in writing on food and beer:

Whether it was by coincidence or design that the last three courses were each chef's take on a dumpling, the result was a ravioli bake-off in which the Padawan learners could not dethrone the master.
— Alexandra Marshall, The New York Times, 17 November 2014

Our final matchup is the Master vs. Apprentice. Many consider Anchor to be the original "steam beer," while Rocket Bike is just another padawan upstart.
— “The Beer Issue,” Salt Lake City Weekly, 10 August 2017

Padawan is also sometimes used in professional contexts, referring to paid internships in technical fields. The job description of a padawan makes it clear that the company looking for such candidates is seeking special young people with specialized skills, and since these positions are often in tech and engineering, perhaps they also assume a level of familiarity with geeky sci-fi vocabulary. At any rate, what’s notable is that they are creating a new category of skilled pre-professional positions, and have found a word that corresponds to it. Whether or not the name sticks is a good question: it will take several years of gathering evidence to see whether or not this is the word we’re looking for.